“Early Access gives us the opportunity to grow a community on Steam and playtest, engage and allow the community to help drive development. We are a small 7 man team that works on the game after our jobs and we've largely used Early Access to help server as an Alpha/Beta that's open to anyone who is interested. It allows us to do events weekly or at any frequency we choose and constantly release new updates.”

“We have been in Early Access for a few years and will be releasing the game in Q3 2021. We have a release roadmap that is on track to hit that mark.”

The full version will contain the full-feature set of the game that we have marketed and discussed, including but not limited to:

“We plan to gradually raise the price as we ship new content and ideas. The first Early Access release will roughly be about half of what our release price will be, specifically because it won't be a content-complete version of the game.”

“We will release a variety of surveys and hold "Play with the Devs" events to gather feedback through Discord chats, forms and other means to gather data and do our best to develop a strong family and community to serve as the foundation for the full release of our studio's first game.”
Read more

Request access and you’ll get notified when the developer is ready for more participants.
Request Access
See all discussions

Every Wednesday night at 10pm EST on http://discord.gg/playhanako we host a Devs vs. Players playtest, test out new features/mechanics/content to help shape the game for full release. These events are always open to all players.

Now in Testing - WEEK of November 23rd Events
- Ground attack is a new mechanic (defaults to C key or left shoulder) to allow knocked down opponents to be attacked. This attack also serves as an aerial strike for the melee classes.
- Fixes to various UI bugs.
- Fixes to various in-game bugs.
- Improvements for players getting launched when interacting with ragdolls.
- Other small fixes.

Previous Event Testing Items
- Fallen trees can now be destroyed again to re-open blocked paths.
- The base areas of Yari Foothills and Shiga Forest (CTS maps) have been redesigned for better flow.
- Audio improvements for swimming in Gifu Crossroads.
- Heavy audio layers for heavy strikes for all weapons and classes.
- Scoreboard/HUD overhaul to replace red used for Hanako with Gold (Their secondary color) to cause less red = enemy confusion.
- Some performance improvements.
- Warmup screen and scoreboard now include map name and game mode.

Official Discord: http://discord.gg/playhanako
This is the best place for events, finding matches/other players and dev talk. 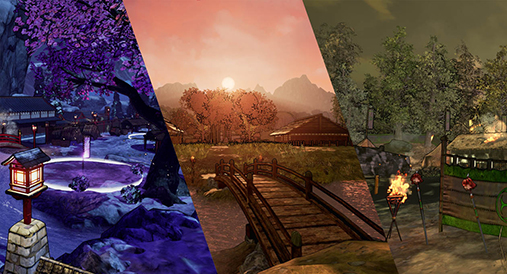 Journey Across Feudal Japan, on a symbolic campaign representing a personal trial of life and death of a lost loved one. Experience multiple levels and game modes to bring peace or chaos, in (up to) 24 player online battles.

Choose Warriors destined to decide the future of Japan: The Kenshi (Swordsman), Naginatashi (Pikeman), Ite (Archer) or Ninja (Assassin). All featuring their own style of combat, movement and weaponry.

Master Combat through discovery of different attacks, abilities and combos. Our combat system features multiple offensive stances driven by your movement, defensive techniques (such as the grappling hook) and abilities (ranging from acrobatic combos to multi-enemy sweeps to multi-hit combos).

What kind of gameplay is this game offering?
We plan to offer a multiplayer experience with several modes of gameplay taking familiar elements and expanding them to fit the game's backstory and to introduce fun and engaging new experiences. Combat is based on your movement direction and supplemented by abilities ranging from strong stunning dashes, to multi-hit combos and Master level abilities.

Any customization for the different character classes?
We are planning on adding some customization to the characters & weapons. Like all things this will be determined by effort needed/budget. We will likely add weapon skins before characters since our content team is limited.

Will the game have any single-player gameplay?
Co-op Vs. AI Mode launching In Early Access v.3 (Apr 5, 2019) will be playable solo. The tutorial is single-player and you can play any map with/against AI.

Are you planning on bringing the game to other platforms?
Other systems is something we would like to strive for. If we can do it, what other systems we would go onto are still "up in the air" questions. Our first and foremost goal is making this game the best it can be for Steam.

What languages will this game be in?
Well English first and foremost but we plan to do at least 3-4 others. In fact we put out a survey to collect answers from you as to what language do you play your games in which you can fill out at language.hanakogame.com

Where can I get more information about the game?
We always welcome feedback/questions. If you post them, we will answer as promptly as possible. Here are just a few ways to get in contact with us