Terrible Laboratory
Developer
aburasobabiyori
Publisher
Kagura Games
The pretty and talented scientist, Konica Yaegaki, must earn money to save her lab from competing companies and peers who seek to destroy her reputation. However, she won't go down that easily. Follow Konica in this slice-of-life RPG as she tries to save her laboratory!
All Reviews:
Very Positive (299) - 80% of the 299 user reviews for this game are positive.
Release Date:
Developer:
aburasobabiyori
Publisher:
Kagura Games
Tags
Popular user-defined tags for this product:
RPG Indie Sexual Content Female Protagonist JRPG RPGMaker Anime Adventure Nudity Funny Mature Memes
+
Reviews
All Reviews:
Very Positive (80% of 299) All Time

The genius scientist Dr. Konica Yaegaki has been developing a brand-new robot, a technological breakthrough that could shake the world... and bring more funds to her research facility!

However, just as the project's approaching completion, she's betrayed by one of her assistants, who has conspired with the president of a rival company to shutter her laboratory by destroying her work.

To make matters worse, the rival company snatches away most of her loyal staff. The cost of repairs is estimated to be over 50 million yen, and now it's up to Konica to raise as much capital as possible and save her precious laboratory!

Join Konica Yaegaki on her mission to secure enough funds to repair her beloved robot! Gather materials, bring your inventions to life, and sell them to the highest bidder to rake in the dough. Whether they be household items, weapons, or armor, nothing's off the table for this laboratory.

Alternatively, if science isn't your thing, you can look around town for part-time jobs from rival companies. They may be the competition, but they still appreciate Konica's brilliant mind.

Just be wary of offers that are too good to be true! Some people don't only want Konica's research to go up in flames; they want to see her reputation soiled beyond repair. You can check the internet to read up on global developments and get a better idea of what people are saying about Konica's lab. Do your best to avoid scandals! 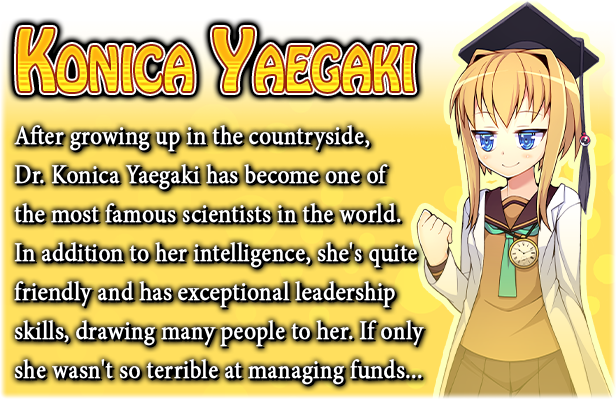 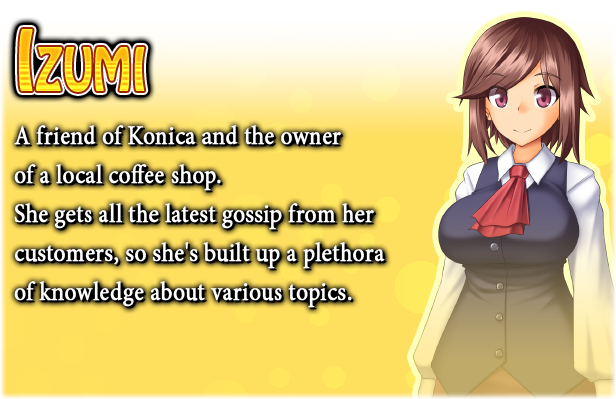 A Slice-of-life RPG
Explore a modern city, meeting different people and visiting places like the beach or the local shopping mall.

Make Scientific Discoveries
Gather materials around the world and build both products you can sell as well as equipment that raises your stats.

In-game News System
Read articles on the internet to see what people are saying about Konica, and check the news bulletins around town!