“Approaching Infinity is a complete game. But from my current perspective, it's the background for a substantially richer and more complex experience. Deeper interactions, superior stories. And you, the Steam Community, can help!”

Steam achievements still need to be finished, and trading cards too. I'd like to make lots of little quality-of-life improvements, and implement a 10th victory condition (there are already 9 different ways to win!)

But the real motivation to be in early access is all the interactions, quality-of-life improvements, and totally new ideas that the community will suggest.”

“Playable and addictive! Every item in the current feature list is enabled and working. There may still be some "divide by zero" errors lurking in the code, which is another reason to do early access for a while. Thanks in advance for those bug reports!”

“Yes. Early Access pricing is lower, while full release will be higher. But nowhere near its all-time high :p”

“In the past I worked with a highly involved community, and together we implemented a LOT of new features; I want to do that again!

Approaching Infinity uses the written words, visual art, and level designs of hundreds of people. I want the Steam community to contribute planet names, poetry, short references, abstract art, and shipwreck levels that will be curated and added into the game.”

Take command of your ship and crew as you explore space, planets, caves, shipwrecks, temples, and other dangerous locations. Find, buy, and sell commodities, equipment, and mysterious artifacts. Defend yourself against aggressive space pirates and hungry planetary denizens. Complete quests for profit, or to change the very power structure of the galaxy!

And the universe is infinite...

There is no limit to the number of sectors and planets you can explore, and there is
no "level cap". Everything keeps getting more powerful, including your enemies!

Make hard decisions about the lives of your crew:

Discover the remnants of an alien civilization from millions of years ago: The Firaxughinians ("Firax") used technology to shift their existence into a higher realm, essentially becoming gods. Even their every-day objects are infused with incomprehensible energies... 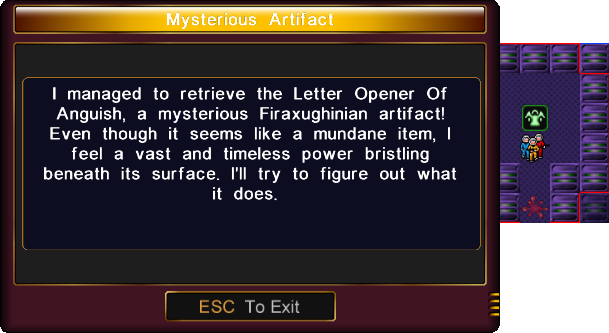 What's different about the Steam version so far?