“With Early Access, we're hoping to refine the fundamentals of Cantata to make it the best it can be, while also improving on our sandbox mode with the community in order to make it into a compelling strategic toybox. We've got other features planned as well to introduce over the course of our Early Access period, and are excited to hear the community's feedback on things like passive abilites, ammo, and more.”

“We currently don't have a set date for the release of 1.0 - but we're not expecting the game to remain in Early Access for longer than a year.”

“The full version of Cantata will include all Campaign Chapters (Chapter 1-9), a fully fleshed out skirmish mode as influenced by community feedback, Online multiplayer, UGC units and maps, a wealth of polish and quality of life changes as well as expanded modding support. And more!”

“The Early Access release contains Act 1 of the campaign, compromised of the first 3 chapters, and map modding, allowing you to create your own Cantata maps and scenarios to play on.”

“Yes, the 1.0 release will represent a substantial leap forward in terms of content and quality, to reflect that, and to reward players who support us in Early Access, you can expect the price to increase slightly once Cantata releases fully.”

“We are at the exciting point in Cantata's development where we're ready to have players engage and give feedback on the balance of our game. We'll be improving Cantata and gradually rolling out updates over the months to come. This is a great time to hop into our discord, say hi and tell us what you think. We'll be hosting regular feedback sessions and Twitch streams as a studio. We'd love to see you there!”
Read more

“The mixture of bold character and map art—which are distinct but equally evocative—and the subtle world-building achieved by conversations that are somehow both terse and characterful creates a singular concoction that I confess I am utterly enamoured with.”
PC Gamer 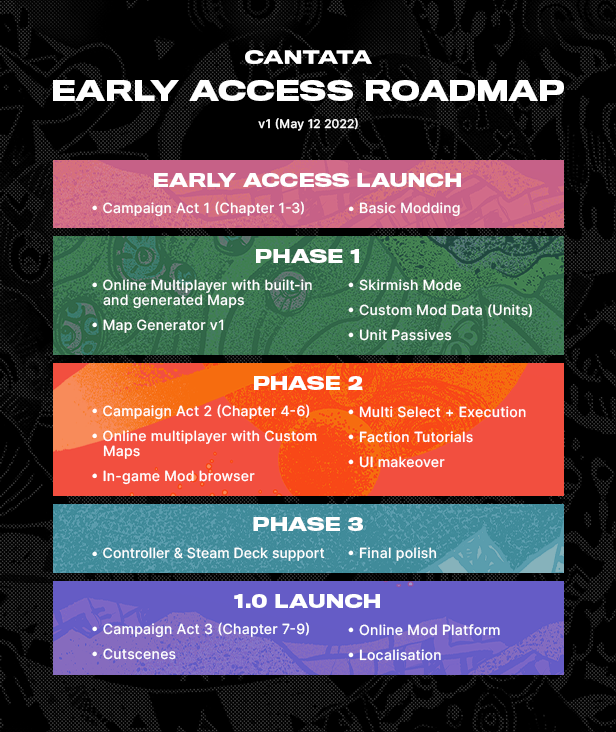 Across the surface of Shoal, ten thousand guns sound at once. The keen of laser beams build, punctuated by the staccato thrum of orbital landings. A choir of voices rises as the armies of the galaxy’s oldest and newest civilizations meet in battle. From the vast reaches of space, the chaos is almost musical—a symphony, drifting into the void.

Cantata is a character-driven tactical strategy game that puts you in the middle of a spiritual, pragmatic war for survival. Play as a commanding officer from one of three factions - Machines, Humans or Aliens - and leverage your faction’s unique powers and abilities to slowly expand your hold on this alien world.

EXPAND YOUR BASE AND ARMY

Each game you'll start with a small base and a couple of units and it is up to you to build up your base, giving you the ability to build more complex unit types. But watch out! Your base is also your supply network. If a crucial building gets destroyed, it may take down your whole supply chain and force you to rebuild to adapt to the new circumstances.

Every map you play on holds secrets you'll need to spend time to seek out and find. This isn't a puzzle game, you'll need to do proper reconnaissance to determine the best route across the landscape to your opponent. The planet of Shoal isn't one to let you idly move across its surface. Just like any other player, the planet itself takes a turn every round, giving it the ability to fight back against the war on its surface with weather, fauna, and other mysteries.

MAKE THE GAME YOUR OWN

Every map that you'll play in the game will be made with the game's level editor that will be available to all players from day one! The easy-to-use, yet deep, editor will put the power in your hands to create challenges you can play through.