“Early Access provides us with an excellent opportunity to gain community feedback and best shape the game throughout the development process.”

“At present we estimate that Monster Sanctuary will be in Early Access for over a year from initial launch.”

“As we add new content and make improvements to the game the price may be adjusted to reflect this, however at present any changes in price are not confirmed.”

“The biggest reason for entering early access is the opportunity to gain community feedback. Players are able to discuss the game, provide feedback and engage with the community on any of the Monster Sanctuary social channels, Discord or Steam forums.” 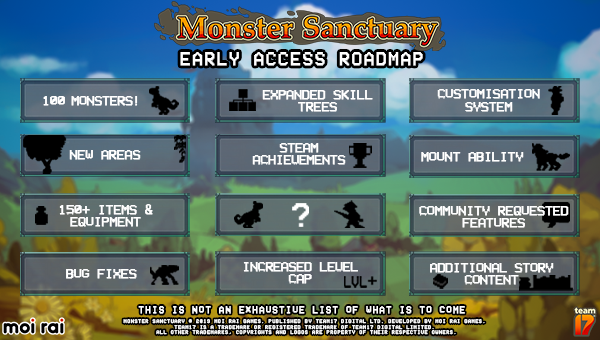 Choose your spectral familiar and follow in your ancestors’ footsteps to become a Monster keeper and save the Monster Sanctuary.

Embark on an epic adventure using the powers of the monsters you collect, and the team you build, to unlock an ever-expanding world. On your quest to become the ultimate Monster Keeper you’ll unravel the cause of a mystery that threatens the peace between humans and monsters.

Hatch collect and train monsters from across the world and build your team. Every monster has a unique skill tree to allow you to customize and tailor your party.

Strategically order your attacks for maximum efficiency, stacking your blows to create combos.
Grind and find the best combo to earn the rarest monster eggs!

Battle Monster Keepers across the world!

Go head to head in a test of skill and ability in online player vs player! Gather and train monsters, max out their skill trees and take on friends and foes in an epic battle until your monsters are the last standing.