“Patch Quest is already well-polished and is launching with 6 completed zones. Another 6 zones will be added during early access, each with new & unique mounts. I have a track record of releasing regular updates, and you can see the game's month-by-month progress over the last 2 years on the Patch Quest YouTube channel.

Patch Quest is my passion project. Thanks so much for supporting development! - Liam”

“I'm planning to release content packs for at least a year from launch. But since the game is easy to expand, I could develop for as long as there's a demand from players.”

“The key difference will be lots of new mounts and new dungeons. I'll be fleshing out the island of Patchlantis so there's more to explore, discover and tame!”

“Every feature listed in the "About This" section has already been implemented. The early game is complete, and a placeholder ending has been added. So throughout early access, I'll be fleshing out the mid-game with more zones, mounts and challenges. And once that's done I'll be adding a "true ending".”

“Yes, the game's base price will increase at the end of early access.”

“Please come visit the Patch Quest Community Discord server! It's a public server that you can find easily via Google search, and it's growing all the time.

I run a daily devlog there, so you can keep up to date with development plans You also can suggest additions and changes to the game. I can't promise to implement your suggestions, but I will promise to read and consider them!

I want to make a fun game that loads of people enjoy playing - so your feedback is very important to me.”

Patch Quest is the only Roguelike-Metroidvania fusion where you can mount and ride EVERY monster in the game! Get ready to Leap, Glide, Tunnel, Bite, Slither, Websling and Explode your way through a shuffling patchwork maze. Survival depends on bending the forces of nature to your own ends! (Supports 2P Local co-op)


Once home to a lost civilisation, Patchlantis has now been fully reclaimed by nature. Fierce monsters, rugged terrain and booby-trapped ruins are all a fact of life, here.

Even the island's patchwork terrain will get shuffled each night by a powerful storm!


Patchlantis is packed with deadly monsters. But that's not always a bad thing - because your Lasso lets you claim a monster as your mount!

Every species can be mounted, and they all have unique skills!

Level Up, Power Up!


The Explorer's Guild has your back - we wouldn't drop you into all this danger unprepared!

Every single run will help you get a little bit stronger, until you can face even the toughest of beasts.

Bond with your Pets!


As you explore, you'll collect and catalogue the islands many plant species. Bring the right plants back to Base Camp to bond with your Pet Monsters, levelling them up! Every monster has unique likes.

You can summon your pets to help out with combat, especially when they're well looked after!

Can you unravel the mystery of why Patchlantis fell? I sense that something sinister lies beneath the island's surface. 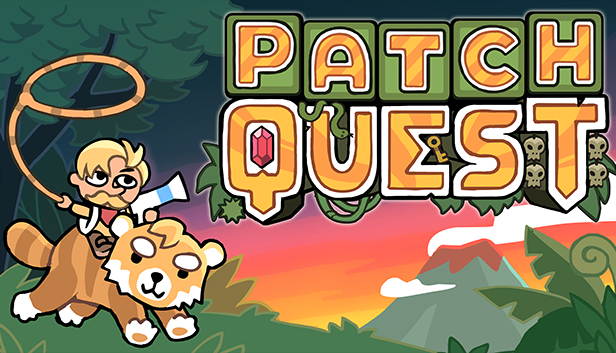 Hey, I see you read all the way to the bottom! Patch Quest is my passion project and I want to keep bringing new mounts, dungeons and treasures to the game for a long time yet to come. Thanks for checking it out - and feel free to join the Discord Community to learn more about future development! :D