Goat of Duty is a fast-paced multiplayer shooter where goats armed to the horns bleat face to face in a relentless deathmatch. Ram and troll your friends, don the craziest goatstumes, and put your skills to the test in the quirkiest FPS ever. Are you ready to become the GOAT of goats?
Recent Reviews:
Very Positive (19) - 89% of the 19 user reviews in the last 30 days are positive.
All Reviews:
Very Positive (437) - 89% of the 437 user reviews for this game are positive.
Release Date:
Developer:
34BigThings srl
Publisher:
🚀 Raiser Games
Popular user-defined tags for this product:
Early Access Action Arena Shooter Comedy Fast-Paced Shooter Funny Memes Physics Destruction Singleplayer Simulation Third Person Co-op Dark Comedy Casual Third-Person Shooter Great Soundtrack Indie Gore
+

“We have been working in this quirky, multiplayer-only experience for a long time. Launching in Early Access allows us to create a direct connection with our fanbase, to know their thoughts and opinions about the game and to both improve and expand the solid base of the game during Early Access. We also have our own roadmap with plenty of new content to provide during Early Access and beyond.”

“Our plan is to release Goat of Duty in three-four months after its Early Access launch, depending on player's reception.”

“Our roadmap includes new maps, game modes, goatstumes (skins), weapons and competitive elements, as well as general quality-of-life tweaks to build upon the base of Goat of Duty. We are also open to your suggestions, as your feedback is extremely important for us, and your ideas and participation in the community will influence the future of Goat of Duty.”

“We want to reward our community for supporting Goat of Duty early on. That's why we will provide a lower price during Early Access.”

“We want our community to be part of the evolution of Goat of Duty. That’s why we have a Discord server to gather all of our fans: we think it is the best place to share thoughts and opinions about Goat of Duty, witness its evolution before anyone else and participate in events only users of our Discord will be able to join. We have already implemented plenty of features thanks to the feedback we received from the players of our closed betas. If you join our community, you will become an integral part of the team!

We are also looking for influencers that want to act as the ambassadors of Goat of Duty in their respective countries. We already have ambassadors in the UK, Canada, USA, Spain, Germany, France, Poland, Brazil, and several LATAM countries, but we are always looking out for passionate content creators that want to cover the game before, during and after its Early Access release, to show the state of the game before anyone else and become the voice of the community in their territory. If you are interested, do not hesitate to write to us at hello@raisergames.com we would love to meet you!”

“Sometimes an idea is just so good (goat?) that it stands on its own two feet. Or rather, four hooves.”
PC Gamer

“A fun mix of adrenaline and quirkiness”
Multiplayer It 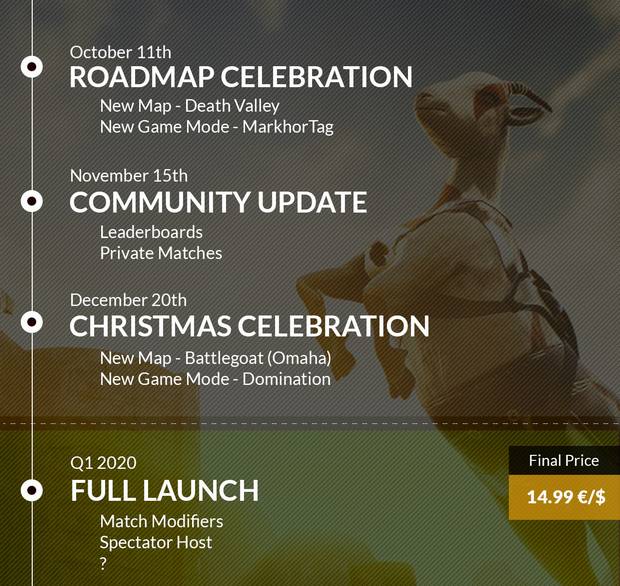 It all started with a freak nuclear accident that gave all goats the necessary intelligence to quickly overthrow their human owners with their powerful rams, high jumps, and ear-blowing bleats. No, wait, that wasn’t it. The goats were intelligent from the very beginning, but since they had no thumbs, they waited patiently for humanity to develop automated robots capable of producing what they needed in order to... No, that doesn’t work either. In an alternate universe, goats are the mightiest warriors of the...

Goat of Duty is a fast-paced and intense multiplayer first-person shooter, and that´s pretty much all you need to know. No nonsense: no need to master a convoluted metagame, learn different characters, combine skills, strategic team play... just devilish combat arenas,
powerful weapons, and fast-paced action. Well, and lots of silly humor, crazy goatstumes (skins), and goat mechanics for you to troll your friends to your heart´s content!