When the New Year dawns in the East, demons enter our world to prey upon flesh and mind. It is on that day when the morning is adorned by talismans, the dragon’s dance begins in the afternoon, and the night sky blazes with red fireworks to ward off the demons. Many would resort to ancient practices in which they find hope; the Hunters in China, however, find hope in both tradition and steel. They have been fighting the demons relentlessly with the weapons they have blessed with legends, and their efforts haven’t gone unnoticed in the West.

Once desperation took hold in Louisiana, Jason Trevors didn’t wait another second to seize the opportunity. He paid the price, made the deals, and the Azure Arsenal began its travels towards him across ocean and land. Crafted and perfected by the veteran Hunters of China, each of these weapons are believed to possess a great power. They are now waiting to be claimed by those who are willing to pierce the heart of corruption with lead and steel blessed under the azure sky.

Nightmares plagued by Sui and the mental agony it causes impregnate this Berthier Mle 1892’s talismans. Believed to have once warded off  the demon, it now keeps the monsters of rot at bay in the Bayou.

Whenever this Romero 77 Handcannon roars, it heralds the ascent of the Jade Dragon, and perhaps it will grant longevity and strength to those willing to wield the gun for bloody endeavors.

The first human was born on the seventh day of the first spring, and this Dolch 96 Precision was blessed under the seventh sun to ensure each life it claims grants more to its wielder.

As sharp as its namesake, this Heavy Knife earned its reputation for its proficiency in lacerating flesh, severing limbs, and crushing bones, the only cure the Bayou needs. 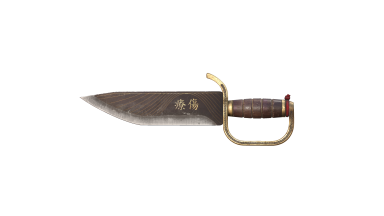