“Europe in the early Middle Ages -- Nobles and clergy rule and the trade between the nations brings prosperity as well as envy, distrust, and greed. Military conflicts are everywhere and whole continents are changing.

With our game MEDIEVAL DYNASTY we strive to demonstrate the real life in the Middle Ages - the real life of a simple but skilled young man, who flees from a war and wants to settle somewhere outside the large cities and battles and who is looking to found a family and build up his life.

We have put quite some efforts into research and have dealt intensively with life in the early Middle Ages. We now want to take you on a fascinating and exciting journey into the Middle Ages and let you experience the simplicity and harshness of survival and daily life as well as to enjoy the many ways to defy the dangers and create a successful small dynasty.

Since the beginning of this project, our developers have advanced with the gameplay, its various features, and quests in a way, that we are convinced we can already offer you a great gaming experience. We are looking forward to learning how you like the mix of genres from survival to RPG and life simulation to City Builder. We ask for your honest feedback and would like to incorporate your ideas and suggestions into the further development of the game. In this way, we would like to jointly make Medieval Dynasty even better and more exciting in the upcoming months. Thank you very much in advance for your support!”

“We plan to remain in early access for at least six months. However, this is also depending on your feedback and ideas. We are looking forward to the further path we will take with Medieval Dynasty together with our community and to an exciting early access phase with many ideas, suggestions and feedback.”

“Medieval Dynasty will continue to evolve - the full version will contain quality improvements as well as new and expanded gameplay elements and features. There are a few loose ends that we want to tie up as well as some exiting roadmap steps:

We would like to include events, challenges, and further skills such as fishing and horseback riding, as well as to enhance agriculture. We also want to include pottery, beekeeping and alcohol production and develop the skill tree accordingly. To better represent the harsh Middle Ages and to add another thrill to the game, we also plan the inclusion of fights with bandits into the gameplay.”

“The game is quite advanced in its development and includes all core gameplay mechanics in this EA stage. The UI is polished and well explained. Besides numerous activities such as hunting, farming, crafting, and building, there is an extensive questline which allows you to explore the fascinating world of Medieval Dynasty even further by introducing you to the game, its story and all underlying functions. The game has been tested for performance and runs very stable and with solid FPS. Therefore, you will enjoy many hours of fun by either directly following the chapters and quests or by roaming around independently.”

“While we do expect to increase the price for the full version, the final pricing decision will be based on various factors such as the scope of added content and improvements to the game over time.”

“We are planning to communicate via our Steam forum as well as Discord and our Social Media Channels. There will be dedicated threads on things like additional ideas, help & support as well as bugs. We invite you to actively participate and provide us with your feedback, so we can further enhance and optimize the game during the EA phase.”

"If you are a player who enjoys Animal Crossing, but want a grittier, more realistic take on the world-building genre, Medieval Dynasty is a game I strongly recommend keeping your eye on."
Gamingcypher.com 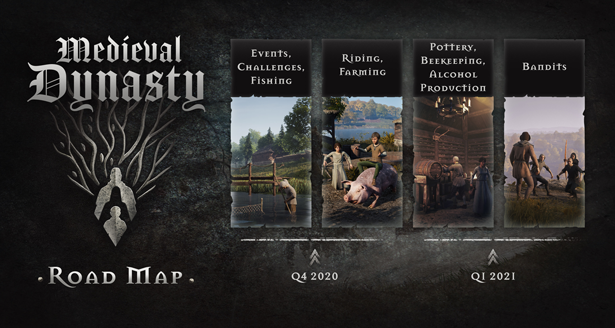 Europe in the early Middle Ages -- Nobles and clergy rule and the trade between nations brings prosperity as well as envy, distrust, and greed. Military conflict is everywhere and entire continents are changing.

In Medieval Dynasty, you take on the role of a young man who has fled from war and wants to take his fate into his own hands. From being alone, inexperienced and poor you will develop into a master of many skills, a leader of your community and the founder of a prosperous dynasty which is meant to last and prosper for generations to come. Defending against wild animals while hunting for food, gathering resources and crafting equipment, building a house and erecting a whole bustling village while founding a family all contribute to a unique gameplay experience across many genres. Tough winters and unexpected events challenge your skills and dexterity as you strive to build your own legacy.

You can choose to follow the main chapters, solve the questlines or just roam around and explore the vast medieval world – but be careful as wolves or bears may try to take a bite from you... Begin with the simplest things for your own survival like hunting and farming as well as building yourself a home. Found a family and have a heir - entice others to live near and work for you, erect many other buildings to transform your settlement into a vibrant village and, ultimately, a thriving dynasty that will reign for generations.

A massive medieval open 3D world awaits… Be aware of harsh winters and unexpected events while honing your skills to turn from a medieval survivor into the ruler of a dynasty. Grab your axe, hammer, or hunting bow - and craft your legacy!

Medieval Dynasty is a unique combination of multiple successful genres:

Survival: The need to survive, feed and ensure survival through hunting, farming and cultivation of the land.

Simulation: Create tools and weapons, construct and extend houses, stables and all manner of buildings as you grow an empire.

Role playing: Develop your own character, interact with NPCs, take care of your family and form community alliances by helping others and trading freely.

Strategy: While pioneering in the Middle Ages you will found and expand a village, manage the inhabitants, collect resources and produce all the goods you need and use or capitalise by trading them.