CHECK OUT OUR PREVIOUS GAME 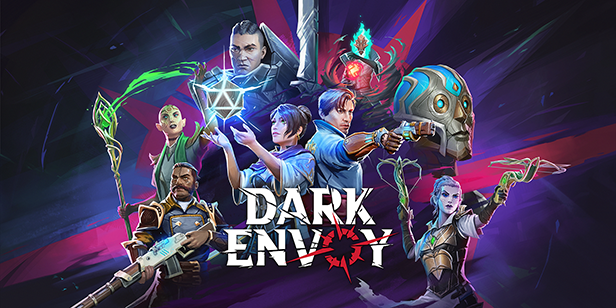 Dark Envoy merges action-packed real-time combat with party-based tactical elements. Dive in the tale of a brother and sister who try to survive amid a conflict-torn Guns N’ Sorcery world.

Malakai and Kaela are children of war refugees. They live their day-to-day life as adventurers, wandering across the inscrutable land of Jäan, mostly relic hunting alongside their friends.

But Jäan, filled with adventures and secrets to be uncovered, is consumed by a feud nearly as old as the artifacts the siblings pursue. The conflict, which defines the tense political atmosphere of the world, can simply be described as a clash of predators over their turf. It's been an eternity since the League and the Empire, respectively the magic- and technology-favoring factions, took it as a goal to be rather the one that does the eating on top of the political food chain. Right now, Kaela and Malakai live in the times of relative peace under the cease-fire. But with how volatile everything is between the League and the Empire, the days of relative peace are already counted.

In this big world, with an even bigger baggage of history, one has to hope they will not become a pawn of either side. Unless… It no longer is up for debate.

JUMP INTO A FAST-PACED TACTICAL RPG

Discover a one-of-a-kind battle gameplay mixing the fast-paced combat of real-time RPG with the depth of tactical RPG.

Control the battlefield, and make sure the winds of fortune carry you onward. Planning your moves, placing traps, creating ambushes are key to your survival. In the midst of combat, use terrain to your advantage: separate close combat enemies from their support by generating stone walls, aim to control sources of health and mana of the battleground. Use covers to protect your range characters.

Some of your spells must be hand drawn to be activated, giving you the tactical freedom to outsmart attackers in each combat arena layout.
Time is another tool in your arsenal! Slow or pause combat, giving yourself the precious moments to react to your opponents’ tactics or flank them before they do…

A VAST WORLD TO EXPLORE IN FIGHT OR IN FLIGHT

Mysterious land of Jäan, full of dark secrets, threatened by the ever-impending showdown between the Human Empire’s technology and magic guarded by the League of Old Races.

From its ancient cave temples filled with unknown mana-fueled technologies, to the desert cities and its backalleys, to the unhospitable swamps and jungles, Jäan is a hostile world for the faint-hearted.

Face a plethora of different enemies who will try to interfere with your quests. From the defensive-oriented Imperial Infantry Corps supported by heavily armored, massive constructs, through swift & offence-oriented elves accompanied by their stone-cold Kranite allies and untouchable Shades to mysterious Revenants that stand guard eternal, protecting the tombs of their masters that have left Jäan millennia ago.


Adept, Warrior, Engineer or Ranger, make your stand – choose your class for Malakai, Keala and their companions. Customize your party with skills, perks, stats and loadouts. While your brother—sister synergy might be on point, time to develop one with everything that’s around you.

Throughout your adventures, join with thy companions and get on like a house on fire! Form the best sell swords party Jäan has ever seen by customizing your party with the 16 available subclasses.

Attack from afar or jump into the fray, always having the true companions at your side. Not to mention your hot-headed brother!
Playing solo or in online co-op mode, progress in the main story at your own pace.

WATCH, LEARN… TACKLE OR TURN AWAY

Be Lawful or Ruthless, as long as you complete the main quest. Make your combat choices and accept the outcome of the battle. Unfortunately, in war times, nothing is black or white. Every path is a path forward. Learn before you choose between magic or technology…