Comanche is a modern helicopter shooter set in the near future. You have the choice to delve into the evolving singleplayer and make a difference in a conflict of global proportions or compete with other Comanche players from all around the world in the explosive team-based multiplayer modes.
Recent Reviews:
Mixed (13) - 61% of the 13 user reviews in the last 30 days are positive.
All Reviews:
Mixed (147) - 65% of the 147 user reviews for this game are positive.
Release Date:
Developer:
NUKKLEAR
Publisher:
THQ Nordic
Popular user-defined tags for this product:
Simulation Action Flight Military Multiplayer War FPS PvP Massively Multiplayer Fast-Paced Early Access Realistic Competitive Team-Based Atmospheric Online Co-Op Sandbox First-Person Bullet Time Singleplayer
+

“Early Access is really important for us because want to balance the expectations of both the hard-core fan base of the IP, and players who are new to the game. Therefore, the decision to go into Early Access was clear. We want to collect community feedback and use it in the development process to make a game everyone will enjoy.

Join our Discord server, become an active part of the comanche community, and help shape the game with your input and feeback. The Discord server is also a great place for you to find pals for your pack!”

“We will be adding more features and content, as well as integrating player feedback, and improving the whole game experience. Currently we estimate Early Access to last around 6 months.”

“We'll add more feature, more content, and of course make the whole game experience complete.
Some of these features might change due to your feedback but this is a selection of planned work:
Flightstick / HOTAS support
More Multiplayer content
More Singleplayer”

“Currently we have an Alpha Version of the game that consists of 2 multiplayer game modes, a single player mission, several maps, and several different helicopters and drones. We believe that now is the perfect time to get the community involved, so that we can hear their feedback, and impliment it in the next steps of the development process.”

“Most likely yes. The Early Access version isn’t the final product and therefore it will be priced differently.”

“The community is a very important part of the Early Access phase. We have already gotten feedback from out closed alpha community, and will continue to listen throughout the Early Access phase and beyond. Community managers will be active in the Steam and Discord channels to collect all feedback that is relevant to the ongoing development of the game.” 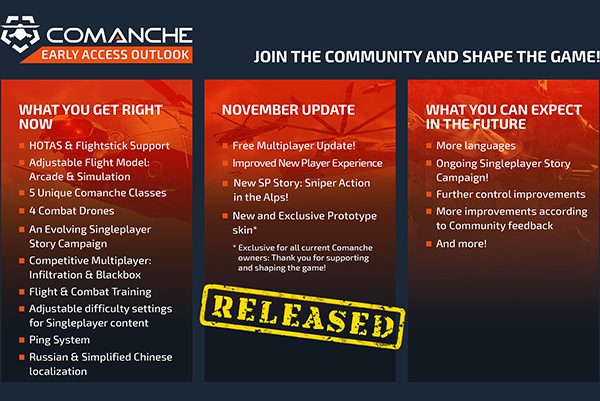 Command the powerful Comanche helicopters in intense and thrilling dog-fights!

Delve into the evolving singleplayer campaign and make a difference in a conflict of global proportions or compete with other Comanche players from all around the world in the explosive team-based multiplayer modes. Choose from an array of Comanche and drone configurations and utilize their strengths to your tactical advantage. Experience a new era of thrilling dog-fights and stealthy drone close quarters action.

After the Iran-US RQ170 incident, in which a UAV (unmanned aerial vehicle) was hacked and captured through cyberwarfare, the US army secretly revived the development of the RAH-66 helicopter program for special operations. The goal was to develop a highly maneuverable, highly advanced stealth war machine for impervious and mountainous terrain, that can deploy unhackable low-range drones to operate in high-risk environments. The program was a full success, and the Comanche special units seemed unstoppable in their missions.

But then, when the blueprints leaked through a whistleblower website, every group and power, who could afford it, built and modified the Comanche for their own purposes. With that, a new era of helicopter warfare had begun.

Vehicular and close quarters combat in one

Steer your high-tech Comanche into air-to-air dogfights. Switch to your drone seamlessly, and engage in close quarter combat inside buildings and tunnel systems to initiate or repel hacks.

You wanted it, you’ll get it! Due to popular demand Comanche will include an evolving singleplayer mode. Use your skills to fight yourself through an explosive conflict, which will extend on a global scale during Early Access (more to come).

Show your skills in different squad based multiplayer modes!

Infiltration
Play either as the attacker or the defender in this explosive objective-based competitive tactical team multiplayer. Compete in 4 vs 4 battles and choose from various Comanche and drone models with spectacular special abilities.

Blackbox
This fast paced multiplayer mode is basically Team-Deathmatch with kill confirmation! Coordinate with your team and find the fastest way to achieve the most takedowns. Heated dogfights are guaranteed!

Become a part of the community

Comanche is an Early Access title and we want your input! Get in touch with us and the rest of the Comanche community on the official Discord server https://discord.gg/comanche. Share your thoughts, ideas and general feedback on the game and help shape the future of Comanche! We are looking forward to shaping the game together with you!