“PROXIMA UNIVERSE will be developed side-by-side with it's players and we will use Early Access as an opportunity to grow our relationship with our community. We will use the players feedback to iterate upcoming features into the game with the vision to make it the best game it can be. The feedback we gather will help us to decide what our players like or what they don't and more importantly what they would like to see in the game.”

“We have an internal development roadmap for PROXIMA UNIVERSE to ensure the quality prior to the official launch. The game will launch out of Early Access when we implemeted all planned content. The longer we are in Early Access the longer we can gather feedback and the better the results will be in the 1.0 version. Nevertheless we can already say that we are not planning to stay in Early Access for longer then 12 months.”

“Throughout Early Access, we will update PROXIMA UNIVERSE regularly to fix bugs and also implement new features and content. Furthermore we also plan to announce any big updates or upcoming changes to the players. The full version will be a highly polished game with a lot of content.”

“The price will stay the same throughout and after Early Access.”

“We believe that the players have a very important role towards the development process of PROXIMA UNIVERSE. Their feedback and thoughts on the game are highly appreciated and will help us shape the game into the right direction. We invite and encourage players to join the conversation on Twitter and Discord.”
Read more 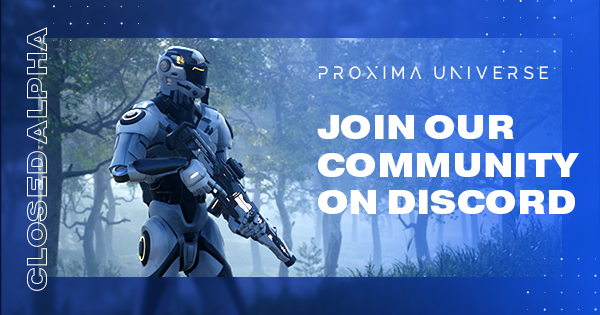 PROXIMA UNIVERSE is a realistic open-world Shooter that supports up to 100 players. A ground-breaking experience with infinite matches, dynamic weather system, seasons and a real 24-hour day/night cycle.

Play the official game modes or unleash your creativity by creating your own mods!

Join the Universe now and experience a new era of multiplayer games! 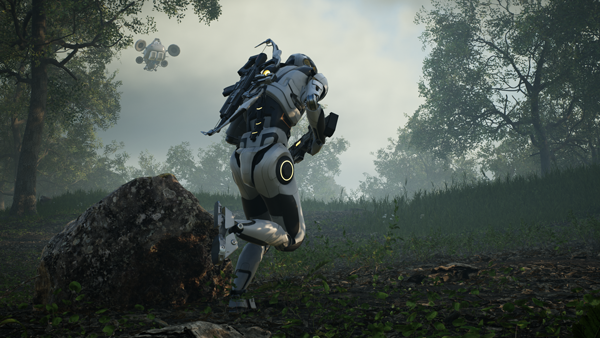 Action in PROXIMA UNIVERSE takes place on an Earth-like planet called Alterra, but unlike our planet it's populated by robotic life forms. 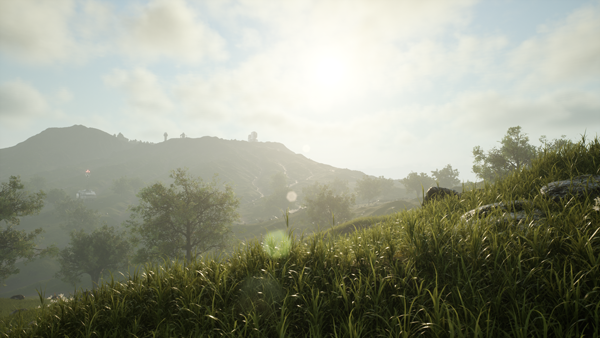 Maps in PROXIMA are big in scale and rich in detail! Our first map Haven for the game mode Terra Control has a size of 4x4 km. Maps in the other game modes will be even bigger!

Stay tuned for news! We at Vulkanic are going to push real-time rendering to the next level!

The weather system of PROXIMA will be based on seasons and will be highly influenced by real weather conditions of the planet Earth.

Spending a day in PROXIMA means you will see how fog appears in the early morning and how it spreads or disappears after some time. You will be able to see how puddles appear as it's raining or how they fill up over time. If there is a Winter season you will see how the environments start to freeze. If it's snowing for many hours or days you will be seeing how the snow spreads and transforms the environment in a Winter-resort-looking place!

We are in love with realism and small details! We will make the most realistic and best-looking weather system of all time!

When we say real 24 hours then we really mean 24 hours! We are simulating a whole day of war and the war never stops unless you leave the game!

We believe in a future where cross-platform features enable players around the world to play together! Our goal is to unite players no matter on what platform they originally bought our game!

In our first game mode called Terra Control all players are divided in 4 teams. You need to capture and control areas in order to have success with your team. After a certain time of early- and mid-game the round's Final Phase starts, in which the winning team is decided.

The cycle repeats without reloading the map or losing any progress made in the previous round! Will you put all your efforts into winning the round or plan a long-term strategy? Decide it together with your team!

The game features three classes: Gunner, Mechanic and Protector. The main purpose of the classes is to set predefined roles for players in a team. This makes the gameplay highly tactical and diverse.

All classes have unique special abilities ranging form offensive to defensive ones. While offensive abilities can affect/damage enemies or reduce their stats, defensive ones can grant additional movement speed or special effects to you and nearby allies.

There are health, shield and energy stats which differ depending on what class you play. Energy is used to cast abilities and refills over time.

All classes have a signature weapon which will not require ammo but use energy instead. These weapons are very useful in extreme cases where you don't have any other equipment to protect yourself.

We're planning to add more classes in the future!

The appearance of your robot is not bound to the class you play! You will be able to choose from different looks. You will also be able to replace the head, add additional elements to the body, change colors etc.

We will regularly release new robotic characters, body elements and other cosmetics after launch! There will be both female- and male-looking characters in the game.

M.A.I. (stands for Multiplayer Artificial Intelligence) will play a big role in how war scenarios will unfold! Every action can mean the loss of your hard-earned points. Dying isn't cheap in PROXIMA. Playing good will be rewarded and playing not careful enough or light-minded will punish you. There is a constant economy running. You don't have unlimited ammo. Well, yes and no.

M.A.I. will charge you for every shot you make! M.A.I. has an asking price for all gear you desire! M.A.I. is effectively balancing the game and it's economy! Selling or buying gear from M.A.I. is one of the key elements of PROXIMA.

PROXIMA will feature a wide variety of weapons and equipment. Weapons differ depending on ammo type (bullets, plasma, arrows etc.) but also are grouped in series such as Horizon (HR) or Stellar (SI).

Each weapon has different stats such as damage, fire rate, shield penetration value, projectile speed etc. All of those make different weapons more or less useful depending on the situation.

We implemented realistic damage models as well as bullet drop and travel time for projectiles. Damage is calculated based on the body part the projectile hits as well as the current amount of shield the opponent has. 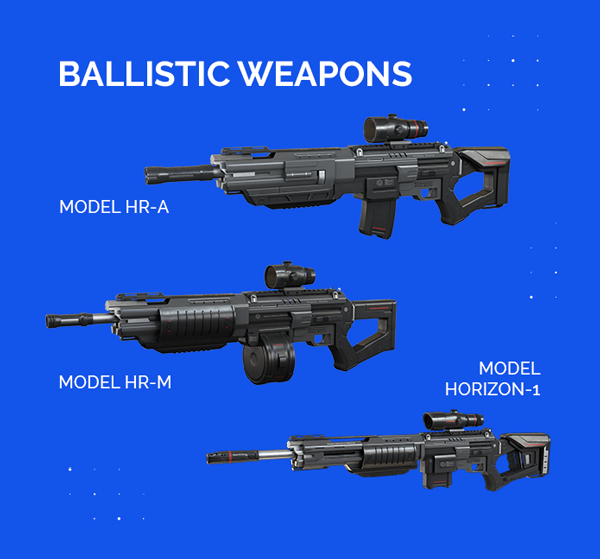 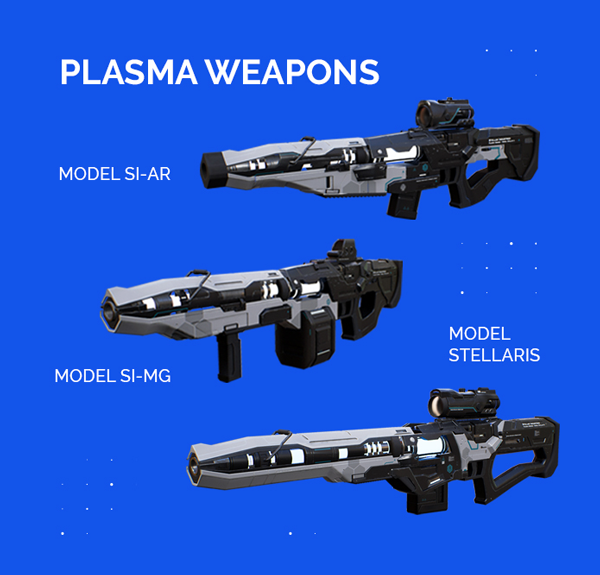 Other types of gear in PROXIMA include:

In the Terra Control game mode all players will spawn in a team base located on the edge of the island.

Take your aircraft, fly to a desired destination and drop. While you are dropping the aircraft leaves the simulation. Keep in mind, your aircraft can be shot down and force you to drop on that exact location. So be carefull!

SWITCH FROM FPP TO TPP

In PROXIMA you'll be able to freely switch your camera perspective!

We developed a system that shares the same animations in FPP and TPP (how others see you). This will solve a common issue of multiplayer games when you appear slightly different to your enemies compared to how you see yourself. For example, when you think you are hiding behind a rock an enemy still can see the edge of your body uncovored. In PROXIMA you not gonna have such a problem.

EASY TO LEARN, HARD TO MASTER

PROXIMA gameplay is understandable and comfortable for a player but still provides a wide space for improving your skills, experimenting and discovering the small nuances that make it so unique. You will learn the base game mechanics in the first minutes after joining the game, but the path of improvement will be long, motivating and rewarding.

On the surface the game can seem casual but due to its complex design it's highly strategic and it can be a true hardcore experience at times. A war scenario can be completely quiet in one minute and in the other everyone is fighting for territory.

Beacons
You will be able to buy and place beacons during gameplay. Teammates can use the beacons to spawn at the beacon locations.

Party System
You will be able to invite your friends to a party in order to play in the same team. In a game there will be no difference between your party members and other teammates.

Voice Chat
Using proximity-based voice chat is a key factor for success in PROXIMA. Communication with your team is crucial! You will be also able to use pre-recorded voice commands to communicate with you team.

Accessibility
We design the game with cross-platform matchmaking and play in mind.

Responsiveness
Experience intuitive character movement and gunplay. A good balance between realism and convenience is part of our design philosophy!

Optimization
We think about optimization in early stage of development! We will not start optimizing the game post-launch! Also you will be able to choose from a wide variety of settings to get the desired balance between quality and performance.

We want to empower all humans around the globe to make their own versions of PROXIMA and  provide a space for creativity. There is no limitations. You will be able to create your own maps and game modes and host a server with them.

Dedicated servers will be available alongside the official servers and matchmaking. We pre up PROXIMA to have cross-platform matchmaking and play across all platforms. Server files for the game will also be released in case you are wondering!

You will be able to play the official game modes by Vulkanic or to unleash your creativity with custom servers or mods, or both!