“Elteria Adventures is a largescale game, with game mechanics and social interactions that need to be tested and refined over time. As such, we need feedback from real players, and the earlier we start getting it, the more we can improve Elteria Adventures throughout the development process.”

“We’re making maximum use of Early Access to start gathering feedback at an early stage. This means that there is no strictly defined release date for Elteria Adventures quite yet, but at the moment, we expect six months in early access.”

“At this point in time, Elteria Adventures contains only a fraction of the content (classes, items, locations, NPCs, etc) that the final game will offer. While quality improvements are planned, the most drastic difference between the Early Access and full version of the game will be in the quantity of content.”

“The game is playable, but you may experience technical bugs and even the occasional outright crash. Visuals are also not yet polished, so the current graphical state of the game isn’t an indication of its aesthetics upon release.”

“Elteria Adventures is and will remain a Free-to-Play title, but as a group of gamers ourselves, we’re committed to ensuring that it never becomes Pay-to-Win.”

“Please don’t hesitate to send us your feedback via social networks, steam community and official site. We will consider player ideas and feedback. Also we plan several events during development and everyone will be able to participate in them:
- PvP tournaments - to try to achieve balance.
- Creative building competitions
- And also fanart and writing competitions
They will give us major input for the development direction.”

The world of Elteria is fully changeable. You can break it, you can build it. Even with basic abilities you can make holes in the world or create platforms in midair, you can throw your enemy in the wall and there will be a hole! The landscape is your weapon: shape it and use it to your advantage in fights with monsters or players! To make it possible, we use our own lighting-fast voxel engine that was in development for the last few years.

The core principle of Elteria is more game mechanics, fewer numbers. Abilities, artifacts, and enemies - all have different mechanics. The major part of gameplay is Artifact crafting. Every artifact gives you some ability and has its own way of acquisition. Equipment slots differ by the abilities given by the items going in each one, not by anatomical forms.

Players can choose one of many character classes - Callings - which give abilities too! Each has a different playstyle. There are no artifact equipment restrictions, this way many unpredictable and funny combinations can emerge. Players will need to choose artifact sets for different situations. We love to see which combinations of abilities players will invent! We will listen to your feedback and the game will be balanced and improved continuously. Three of callings are already playable and two more in development. You can expect the continuous addition of artifacts and callings. 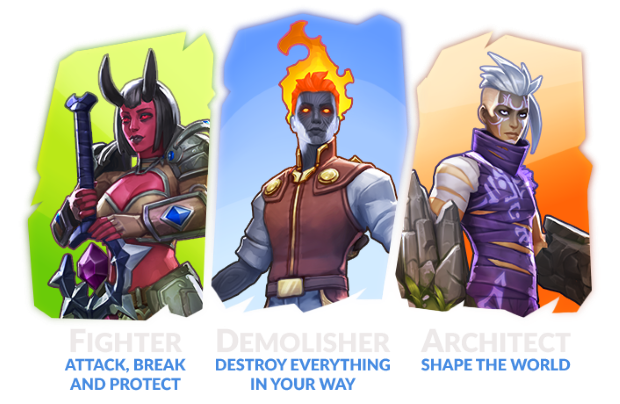 In Elteria, you have not only the usual MMO or RPG feel, but platformer-like too! The world is made of flying islands, some are large, some are archipelagos of small ones. For ease of movement between them, there are jumper mushrooms, sunflowers, and other fun movement objects. They create a unique platformer feel while remaining a 3D open-world RPG. Some abilities allow you to move even better. Just look at that:

Almost anything you see on the screen is interactive more than in most other games. You can break it, or it wants to break you. Explosions make huge craters and break trees, you can break walls with enemies, mushrooms propel you in the air or on another island, tentacles emerge from the floor and hit you, some plants are mines, some are collectible, and of course, monsters are trying to kill you or do other fun stuff with you!

The game has a deep narrative. The following is the part of the playable character's story.


Your old world was full of misery and injustice, but suddenly strange portals started to appear in cities. You decided there is nothing to lose and stepped in. You found yourself in the lush and magical world of Elteria, filled with peculiar creatures and flying islands! After you finished staring on the massive planet in the sky, the green piglets and another floating island, you notice the large blue crystal, hanging in the air. You came to it, and suddenly, a mysterious projection of a woman appeared and started talking to you! She wants to help you. You don't know her motivation, but she seems very friendly. You have so many questions about this world...

We have also created a backstory of the Elteria World itself, called Elteria Cataclysm. In the game, the narrative will continue to evolve, being mysterious and thought-through.

Elteria once was a beautiful world inhabited by all kinds of people. It was a place similar to Victorian London – bubbling with life and constantly evolving. But everything changed with the discovery of new properties of the very fabric of reality. Civilized world was swept away by Magic Rush – every scholar dived into the new branch of science trying to make a breakthrough.
According to her theory, such object combined with a sophisticated system of gem drainage would allow opening a stable rift between worlds, giving pretty much an unlimited amount of energy. She wanted to create a utopia and to achieve this goal a research group was put together. Thus began the “Magical World” project.
Read the full version

Players have their free personal Home Field. We plan to add large guild spaces. You will be able to build fortresses on islands, and on them you will be able to fight other players, to attack others, or to protect them from PvE events. There will be battlefields and leaderboards, but imagine how fun it will be to battle with other players using all these land-altering abilities!

Your main building tool is blueprints. The voxels are very small and placing each individually would be too slow, but with blueprints, you can instantly create some forms. Yes, you CAN use them in battle! Some BPs are basic forms; some are complex and rare ones even have aura effects on them. I.e., a wall which slows enemies around it. You still need materials to place BP. The material will define structure durability. You can find BPs anywhere in the world, and once you found one, it's yours.

To make full use of voxel world, we are considering adding a separate world with creative mode and no monsters, for players to express themselves fully. We are not yet sure and will evaluate the feedback later.

The visual appearance and style consistency of the game is crucial for us. You already can see day and night cycle, voxel lighting and you can expect continuous polishing of visual style.
We have written an entire gamepedia wiki about Elteria Adventures! If you are interested in detailed information about the game, check it out!