“We're doing Early Access because it allows us to build our game in a live community and work towards becoming better developers each day. We’d like to provide a very competitive environment that revolves around community tools and integrations. We’ll focus on gameplay first to ensure a smooth and lag free experience before worrying about animations or graphics.”

“This game will be in Early Access until we polish up the animations, sounds, or pretty much anything artistic that we couldn't afford yet. It will need at least 7-10 maps and a bunch of custom character skins before it can be considered fully released. But with the way things go sometimes and the fact that it took us what felt like an eternity to even release into Early Access, it might stay in Early Access hell forever. /s”

“The completed game will include at least 7-10 maps developed over the course of Early Access. It will have professional animations, high quality characters, and detailed customization options. There will be immersive sounds and improved visual effects that are increased over time so performance is never compromised. There’s also plans for a robust set of community tools and integrations. This will include detailed stats and rankings along with a competitive matchmaking system.”

“The current version is just an alpha build and has a long way to go. There’s a very simple interface and most animations are placeholder. We provide both dedicated servers and hosted user-created servers with full workshop support. There's in-game voice communication along with many essential video and audio settings needed in a competitive shooter. We also have a comprehensive set of key binding options including controller support and the ability to create controller-only rooms.”

“We plan to gradually raise the price as new content is developed. We feel it’s important to grow our community and want to provide a low barrier to entry. We’re focused on building a game with longevity that players can really dedicate themselves to without worrying about it being phased out for another project the next year. That means you're going to want to buy it now while it's a cheap piece of crap. /s Think of it as a long term investment.”

“There will be occasional podcasts on Twitch to engage our community and keep them up-to-date with recent news and announcements. We’ll also have a robust set of community tools and integrations that let players know what we’re working on and how they can provide feedback on new features and map packs.”
Read more
View Community Hub
See all discussions

Task Force provides modders with the ability to upload custom maps, characters, and sounds using our built-in workshop tool. This workshop content can be added to any dedicated server or hosted user-created server and included in your server maplist.

Task Force is a low budget tactical shooter made by a couple of dudes. It focuses on close quarters infantry combat and aims to provide competitive arcade-style gameplay inspired by classic third-person shooters. Unfortunately it has amateur animations, store-bought character skins, and there's tons of things missing and unfinished since we're actively developing the game. But our plan is to create maps inspired by locations around the world where special operations are conducted. These could be jungles, deserts, urban areas or snowy environments. This requires a lot of realistic high quality content that covers a wide array of regions. Therefore as such a small team this is something that will take us some time since we want to do the job right. But we are completely self-published and we don't answer to any big publisher that only cares about profits.

TACTICAL THIRD-PERSON GAMEPLAY
Gameplay focuses on close quarters infantry combat where communication and teamwork are required. Expanding crosshairs provide a sense of weapon inaccuracy which is affected by recoil, stance, movement, and a few other factors. It rewards bursting by keeping tighter shots more precise while still allowing for accurate spray.

STRATEGIC ROUND-BASED GAME MODES
Game modes are round-based and mostly focus on single-life objectives. They’ll involve aspects such as planting or defusing bombs, extracting or guarding hostages, and capturing or defending intel. Each map will be designed to a specific game mode but may also have different areas sectioned off for different modes.

- NO Health Regeneration
- NO Weapon Unlocks or Economy
- NO Enemy Targeting (UAV)
- NO Character Progression
- NO Killstreaks, Deathstreaks, or Perks
- NO Drivable Vehicles in PvP (Co-op Only)
- NO Looting or Weapon Drops
- NO Unrealistic Skins

So if you've been looking for a classy third-person shooter that doesn't sell out then you've come to the right place. We actually strive to honor the heroes in special operations that put their lives on the line to defend our freedoms. If you want a game that takes itself seriously enough to have military accuracy, inspirational music, competitive leagues and tournaments, yet not so seriously that it's still a "game" with jokes, taunts, and dancing on dead bodies, then this is the game you've been looking for.

Here are some of our map designs we've been working on:

Khimik was inspired by the armed conflict with separatist forces in Ukraine and will focus on close quarters industrial combat in a forest environment. 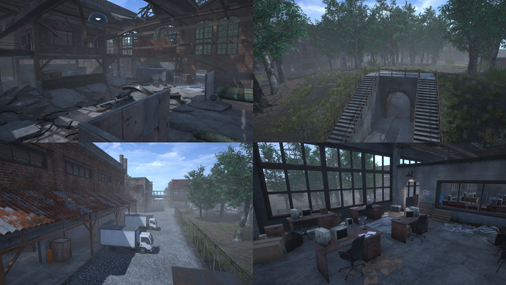 Jazar was inspired by the liberation of an Iraqi city and will focus on close quarters urban combat in a desert environment. 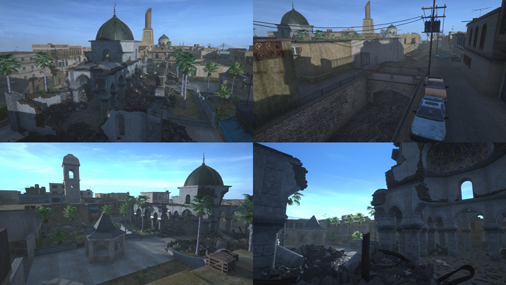 Pantaro was inspired by the liberation of a city in the Philippines and will focus on close quarters urban combat in a tropical environment. 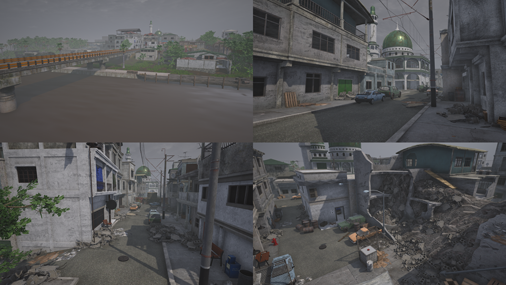