You find yourself aboard a series of luxury 1920s cruise ships – a guest of the mysterious Mr X who has engineered your presence on board to take part in a murderous game.
All Reviews:
Mixed (439) - 57% of the 439 user reviews for this game are positive.
Release Date:
Developer:
Blazing Griffin
Publisher:
Blazing Griffin
Popular user-defined tags for this product:
Action Multiplayer Indie Remake First-Person Early Access Atmospheric Stealth Stylized Memes Comedy Mystery Replay Value Funny Survival Horror Political Politics
+

Not only can you play with the original world leaders such as Thatcher, Castro, Blair and Bush from The Ship: Murder Party, but we’ve added two more potential leaders to the mix - Hillary Clinton and Donald Trump. So whether you’re with Hillary or believe Trump can’t be stumped, take up arms and prove who’s the real captain of this ship!

The World Leaders is a FREE add-on that is included in the June 30th update. 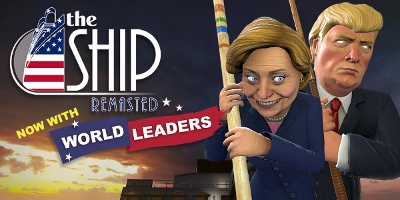 The Ship: Remasted is a remake of the classic 2006 game, The Ship: Murder Party.

You find yourself aboard a series of luxury 1920s cruise ships – a guest of the mysterious Mr X who has engineered your presence on board to take part in a murderous game. You and your fellow passengers will be assigned a target to kill and must do so before your own hunter tracks you down. Armed with a wide array of weapons and traps, use all of your cunning and skill to dispatch your unsuspecting target and avoid sleeping with the fishes.

All aboard and enjoy the cruise.

Dedicated servers (16 players) are live! LAN (16 Players) and Listen Servers (8 players) are also available to set up. Please read our FAQs in the Steam discussion forums before you buy.