The Long Dark
Developer
Hinterland Studio Inc.
Publisher
Hinterland Studio Inc.
THE LONG DARK is a thoughtful, exploration-survival experience that challenges solo players to think for themselves as they explore an expansive frozen wilderness in the aftermath of a geomagnetic disaster. There are no zombies -- only you, the cold, and all the threats Mother Nature can muster.
Recent Reviews:
Very Positive (1,929) - 88% of the 1,929 user reviews in the last 30 days are positive.

This product has experienced one or more periods of off-topic review activity. Based on your preferences, the reviews within these periods have been excluded from this product's Review Score.
All Reviews:
Very Positive (82,445) * - 91% of the 82,445 user reviews for this game are positive. 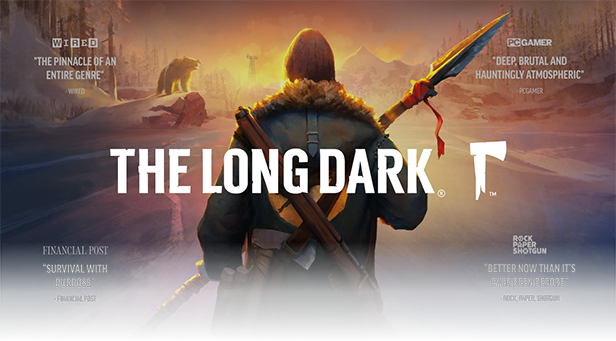 Bright lights flare across the night sky. The wind rages outside the thin walls of your wooden cabin. A wolf howls in the distance. You look at the meager supplies in your pack, and wish for the days before the power mysteriously went out. How much longer will you survive?

Welcome to THE LONG DARK, the innovative exploration-survival experience Wired magazine calls "the pinnacle of an entire genre".

THE LONG DARK is a thoughtful, exploration-survival experience that challenges solo players to think for themselves as they explore an expansive frozen wilderness in the aftermath of a geomagnetic disaster. There are no zombies -- only you, the cold, and all the threats Mother Nature can muster.

In THE LONG DARK, you are getting both the genre-defining Survival Mode, honed after years of open development and frequent updates, and the award-winning episodic narrative mode, WINTERMUTE.

Survival Mode is the free-form, non-narrative Survival Sandbox that has defined the genre since launching on Steam in 2014. After years of open development and dozens of major updates, THE LONG DARK now stands at the pinnacle of the entire genre. Survival is your only goal, and death your only end. Make your own survival story with every game.

The game that defined death for the survival genre. When you die in Survival, your save is deleted. Every decision matters.

The game challenges players to think for themselves by providing the information but never the answers. You have to earn the right to survive.

Monitor your Hunger, Thirst, Fatigue, and Cold as you struggle to balance resources with the energy needed to obtain them. Every action costs Calories, and time is your most precious resource. Choose your path carefully.

Explore a 50+ square kilometer Northern Canadian wilderness spanning 12 major regions and all the zones that connect them in search of life-saving supplies. Distant mountains, coastal towns, mines, farmlands, and a huge expanse of brutal winter wilderness to test your survival mettle.

Hunt, fish, trap, climb, map, search for life-saving food and gear items, and try to avoid dying from the hostile wildlife, succumbing to hypothermia, frostbite, or dysentery (amongst other uncomfortable afflictions), find and maintain your life-saving gear. Hunt and be hunted by: Wolves, Bears, Moose, Rabbits, Deers, Crows, and more to come in future updates.

Four distinct Experience Modes let you find a challenge level you are comfortable with, such as Pilgrim Mode, which is meant to be quiet and pensive, all the way to Interloper Mode, where only the most experienced survivors have a chance to last a week. If none of the four Experiences suits you, use Custom Mode settings to tailor your Survival Mode game to your specific tastes.

Features the music of Sascha Dikiciyan.

The episodic story-mode for THE LONG DARK, WINTERMUTE, includes four of the five episodes that form WINTERMUTE. Episode Five is in development, and is slated for a late 2023 release. This will bring the WINTERMUTE storyline to its conclusion.

The first four episodes of WINTERMUTE represent approximately 30 hours of gameplay. Episode Five is included in the price of the game, and will be unlocked for free as they are released.

Bush pilot Will Mackenzie (player character) and Dr. Astrid Greenwood are separated after their plane crashes deep in the Northern Canadian wilderness in the aftermath of a mysterious flash of light in the sky. Struggling to survive as he desperately searches for Astrid, Mackenzie comes across the small town of Milton, where he begins to understand the scope of this quiet apocalypse.

Mackenzie’s search for Astrid takes him deeper into the savage Winter wilderness. A mysterious trapper may be the key to finding Astrid, but can he be trusted?

In the aftermath of events in Milton, an enigmatic stranger rescues Dr. Astrid Greenwood (player character) from near death. Facing the blizzards of Pleasant Valley, Astrid must bring all her skills as a doctor to bear on the survivors she encounters. But will she find Mackenzie, and get closer to the mystery that's taking them to Perseverance Mills?

A murderous gang of convicts has captured Mackenzie. Desperate to escape one of the darkest corners of Great Bear Island, he must somehow survive his fiercest enemy yet. Can Mackenzie recover the Hardcase, continue his search for Astrid, and also save the innocents caught up in this deadly confrontation?


NOTE: Unlike Survival Mode, WINTERMUTE does not feature permadeath. You can save your progress as you play.

Several standalone Challenge Modes offer objective-based experiences designed to last 1-3 hours each, such as Whiteout -- the race to gather enough supplies to prepare for a monster blizzard. Or Hunted, where you need to escape a murderous Bear. Complete them to unlock Feats that provide long-term gameplay benefits in Survival Mode. Additional Challenges include: Hopeless Rescue, Nomad, Archivist, As the Dead Sleep, and Escape the Darkwalker.

In addition to releasing the remaining episode of WINTERMUTE, we intend to continue updating Survival Mode with limited free updates alongside our paid DLC Expansion Pass, TALES FROM THE FAR TERRITORY, running through 2023. This is on top of the over 100 updates we have made to the game over the past 8 years of open development. Keep in mind that your purchase of THE LONG DARK entitles you to all five episodes of WINTERMUTE without extra charge. For more information about the free updates coming to Survival Mode, please visit the Expansion Pass roadmap at http://www.thelongdark.com/expansion. 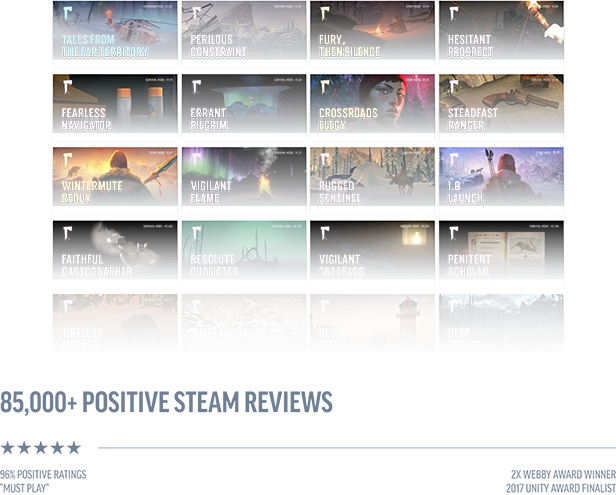 A detailed Roadmap and progress status page is available at www.thelongdark.com/expansion. We also encourage you to participate in our Official Community at www.hinterlandforums.com. Share your stories, get support, and join one of the best communities in games today.

Our fictional settings -- our IP -- are conceived from the ground up to exist across multiple mediums. We believe that when people love a world, they want to experience it across as many platforms as possible.

Hinterland's first IP, THE LONG DARK, first launched on Steam Early Access on September 2014. The game's multi-platform 1.0 launched on August 2017. Today, THE LONG DARK has more than 10-million players around the world.

We aim for our games to foster a sense of social awareness, and we aspire to provide immersive, sophisticated worlds for anyone seeking a mature entertainment experience.

Join us on our journey.

765 Curators have reviewed this product. Click here to see them.