Marked by death at birth, Sofia thought her visions a blessing until the day they led four dark figures to her family home. Flames consumed everything they touched, and as she watched, the horizon turned a yellow-red, familiar faces melted like wax, twisted in agony, and four gunshots echoed in the night, each followed by the cry of a familiar voice of a family member crossing through the veil.

When the last ember died, Sofia performed an old blood ritual, seeking guidance from Death. In that final vision, she saw bloated corpses, an old wooden gate, and a woman presiding over a cemetery blanketed with marigolds; her face blank and smooth, and her bony finger pointed at northeast.

Sofia followed the signs in pursuit of the Four. Death is ever-present in the Bayou, stalking any foolish enough to tread among its corrupted inhabitants. And so Sofia – said to be messenger and herald to that dark and ever-present Reaper – inevitably found her way to Louisiana, where she could be close to the source of her visions, and attempt to satiate her desire for vengeance. The American Hunter’s Association did not think twice to initiate her, and she now leads the dead – and the living – in the Bayou to their final sleep with the barrel of the Weeping Marigold and the blades of Eye for an Eye at her side, always searching.

Visions forged by agony and suffering came true when Sofia’s family were murdered by four strangers. Blinded by an insatiable thirst for vengeance, she made a blood pact with Death and is now in pursuit to herald the Four’s last breaths. 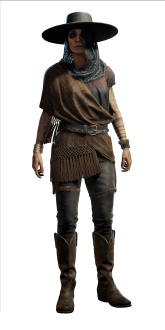 Eye for an Eye

When flames consumed Sofia’s past, nothing but charred bones and these Throwing Knives remained among the ashes. Tempered by fire and an unholy grudge, each blade eagerly longs to help quench Sofia’s thirst for vengeance.

This Vetterli 71 Karabiner Marksman accompanied Sofia in her journey from beyond the southern border to the Bayou. Now it guides its wielder’s prey, much like its namesake, to where they belong: the land of the dead.