The first First-Person Football Manager gives you the chance to make your dream, of becoming a top striker in one of the major European leagues, come true.

You are a young and very gifted football player. Now you are getting the chance to play in the first league. Fight to achieve an essential position for yourself in your team, either by intensive training or by winning the sympathies of the fans and the trainer by other ways. Give interviews, make yourself seen in TV broadcasts and read your performance reviews in the papers.

Your private life is also an important factor. Do you want to get married, have kids, and buy a house? Do you want to buy fancy cars and try your luck in gambling, or do you rather want to fill up your bank account? Buy shares and monitor the stock market developments. Sign advertising deals and grow your popularity on social media.

Be careful not to make the wrong friends and keep concentrated on football.

Achieve the sympathy of the national team coach and be part of the World and European Cup. Participate in international and local cup matches as well as matches within your league. The game includes all major competitions. Transfer to other teams and employ your personal fitness coach.

Do you want to play fair, or do you prefer to cheat during the match? It is all up to you!

In addition to your career, you can also replay historical World Cup and European Championship tournaments.

Subsidized by the Federal Ministry of Transport and Digital Infrastructure. 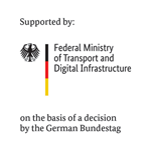