“Two Strikes is a fighting game made by just 3 persons. Having the community involved will increase the overall quality of the game and get the game to a bigger audience, which will help balance the characters, find bugs which is very important for this genre.”

“The current version of the game consist in 4 playable characters, still unbalanced and without features that will be present in the final version, like an multiplayer online version. The full version will have 6 playable and fully realized characters, balanced against every other characters, another game modes like story mode, in-game content like images from development, concept art. The current state of the game only has one AI difficulty, the final version will have several difficulties to all level of players.”

“The current state of the game comes with 4 playable fighters, four scenarios and four theme songs. The game is still unbalanced and has some minor gameplay bugs that will be fixed along the early access. It doesn't have all gameplay feature such as what we call "Fierce Duel" which prevents players to be double K.Od. Also, right now the only multiplayer mode is local multiplayer. The final version is expected to have online multiplayer.”

“Yes, the game will be cheaper during early access and then a small increase for the release.”

“The community will be a the most important part of this early access. Two Strikes is a game created by 3 persons and not a lot of playtesting were carried to determine how balanced the game is between 2 human players. The AI is good enough, even though it will be improved. Also, as a small indiedev team, we are still testing new features in the gameplay which will be tested by the community, besides finding bugs and reporting them for us.
Other important thing is that we will be adding more characters throughout the early access and the community playing the game and testing it for us is utmost important to release a rounded vanilla version by the end of the early access.”
Read more

Choose between 8 unique warriors in the released version! Each one with their own moves and fighting styles! (Currently 4 available warriors).

Get into position with caution, lives are on the line, move around, dash to get closer or avoid attacks!

Now you have your opponent within your weapon's reach! Attacking is the only way to victory, but be careful, simple attacks are easy to read and dodge!

Letting your opponent thinking what your next move will be is the key to overpower your enemies! Fake attacks by canceling them with dashes!

And finally, once you have your opponent figure it out, finish them with powerful attacks!

Some players are having difficulties to setup their controllers. Follow this quick tutorial to setup your controllers in the steam configurations:
https://steamcommunity.com/sharedfiles/filedetails/?id=2506578964
Once the controllers are set, they should work like this: 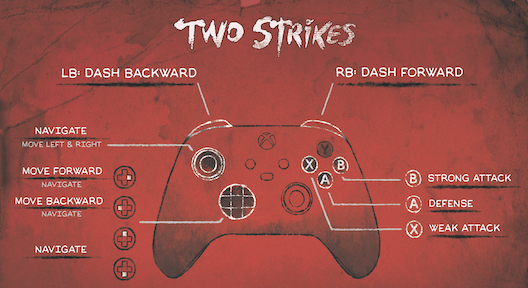 For the latest in Retro Reactor news and community events, drop by our official https://discord.gg/NFps6QQ4jK channel!