“Golfie is in Early Access so we can develop the game in partnership with our wonderful community. Join the Discord to help shape how the game evolve.”

“We expect to leave Early Access in around nine months.”

“Throughout the development of Golfie we will be adding new cards, power-ups, course options and modes. We will use the feedback from the community to refine the game’s systems and balance.

In addition highly customisable multiplayer modes will allow you to play a round your way – adapting rules, power-ups and cards to create the perfect competitive golf or party game.”

“The game is fully playable from start to finish in single-player.”

“Yes, we will be raising the price just before we release the final version.”

“We would love our players to provide feedback either here on the Steam Community Forums or via our Discord, located here: https://discord.gg/69JgEsfUdc”

Deckbuilding meets minigolf in Golfie – the only game in which you can power-up and modify realtime golf shots by collecting and crafting a deck of cards.

Each run requires strategy, planning, and skill. Build unique decks which can unlock incredible new ways to play, giving you the power to pull off some spectacular shots.

Try to beat 18 holes from an unlimited supply of procedurally-generated levels in the single-player roguelike campaign. Shape the deck your way by collecting cards, and gain bonuses and abilities through special modifiers – all of which can combine to create truly unique shots.

Card powers can vary from increasing the distance or elevation of a standard shot, through to out-of-this-world abilities and power-ups which can be combined to dazzling effect. But be careful: finish over par and you’ll lose some energy – and once it’s totally depleted, the run is over.

Daily runs, endless modes and seeded runs mean you’ll never run out of holes to play. Gain experience during each run to unlock an ever-increasing pool of cards and customisation options, then return to the course with even more ways to play. 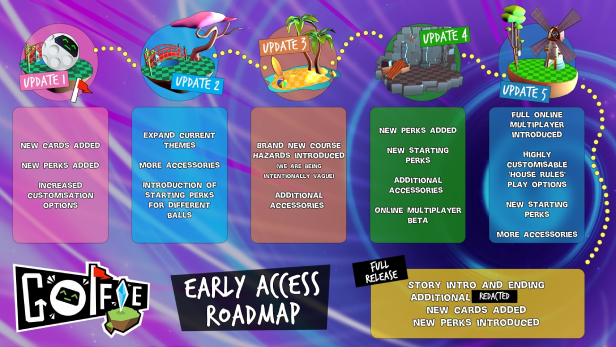