“Our goal with Deepest Chamber: Resurrection was to create a project where the community gets a front seat in the development process. From the start, we have designed the game to be flexible in terms of content addition, as we think deckbuilders and roguelite really beneficiate from the players' inupt.

So whether it’s design suggestions, or just flat out raw balance pointers, we aim to be very receptive to constructive feedback coming from our community and create the best possible version of our game together.”

“Based on player feedback, we’ve decided to update some of our game’s core features. As a result, our previous estimation of 12 to 18 months estimate has shifted, and we are now expecting to launch the full release in Q3-Q4 2023.”

“The 1.0 release of the game will include different areas, as well as more cards, trinkets, enemies, events and challenges for the player to take on during multiple playthroughs. A more in-depth dive into the lore and end-game stages will also be provided.”

“The Steam Early Access version includes multiple zones to be explored, alongside a hefty collection of cards, consumables and trinkets to provide the player with multiple hours of replayability. It offers many features that will also be present in the 1.0 version of the game, like Card Boosting, Intent Management and the Three-Player Party System. The following updates will include things like multiple new cards, consumables and trinkets to further expand the strategic depth and replayability aspect of the game.”

“The price of Deepest Chamber: Resurrection will be staying the same all throughout all Early Access. However, should the price increase for its official 1.0 launch later in 2023, we will announce it ahead of its full launch.”

“We will keep a clear line of communication with our community throughout our entire Early Access endeavor. It is our goal to listen to all constructive suggestions proposed by the community and improve our game thanks to their ideas and feedback. If you are someone who has already enjoyed the game and wants to share their impressions or ideas with the community and the development team, please consider joining us on our Discord Server!”
Read more
Check out the entire Those Awesome Guys franchise on Steam

“I like the theme and perspective of it! This is probably as close to seriously playing a deckbuilder roguelike as I've ever gotten.”
Dan Gheesling

“I got deeply entranced! I think there's a lot of potential here.”
Retromation 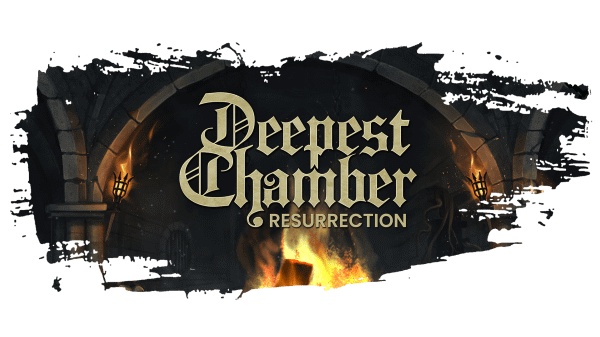 A roguelite strategic deck builder, Deepest Chamber: Resurrection challenges players to endure a series of increasingly demanding descents into the murky depths of a dying city. With the odds stacked firmly against them, three heroes set out to blaze a trail through the darkness and rescue their people from a fate worse than death.

It's dangerous to go alone: Vast amount of cards, items and trinkets to create your favorite builds and combos.

Mighty handy: boost your cards to pack a more powerful punch and synergize their buffs with different items and mechanics.

Balancing Act: The hero party system allows players to enlist three out of four possible champions at the start of their run. Each hero has cards, abilities and equipment dedicated to their class, adding an extra layer of planning and strategy with each descent.

Run for your lives: Apart from regular runs, in which heroes retain some of the loot won on previous descents, players can employ Death March mode, in which equipment stats are ignored, for an even more ruthless experience.


To be kept up to date on all things Deepest Chamber: Resurrection, make sure to join our dedicated Discord server!

More from Those Awesome Guys