■ In Touhou Doll Draft , you form teams comprising “dollified” Touhou Project characters and send them into battle against each other. 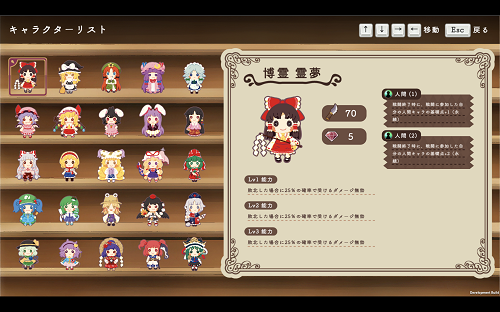 ■ Characters can be made stronger by gathering characters from the same group together, or by putting characters who have special feelings for one another on the same team.

■ Suddenly finding herself far away from her native Gensokyo, lost in a world similar to that of Alice in Wonderland, in order to return to her world “Alice” must fight in a mysterious game known as the “Doll Draft” in which she must take control of puppets...

Alice Margatroid
● A magician with “the ability to control dolls”.
● Character with an “Alice”-based motif.

Tewi Inaba
● A Youkai rabbit, who in attempting to stay as healthy as possible in order to live long, ended up attaining Youkai transformation powers. Has “the ability to bring fortune to humans”.
● Character with a “White Rabbit”-based motif.

Remilia Scarlet
● A vampire with “the ability to control fate”.
● Character with a “Queen of Hearts”-based motif.

■ Up to four players can do battle online.