“Dark Existence has been in development since early 2020 and already has a working four-player cooperative mode where you will be able to play with friends, as well as playing alone. I have decided to put this project as early access as this is my first ever multiplayer game that I am making and I am the only person working on it, therefore, as my way of ensuring a good quality game, I intend to release the game in a workable state that will prove enjoyable.

After being inspired by Hideo Kojima's title Silent Hills and being a massive horror fan, I decided I want to make my dream project. I have aimed to make a true psychological horror experience, and as this is quite a sophisticated advanced artificial intelligence-based project, I want to get this game out to other horror fans and keep working on it over time. This will include bringing out new levels, new game modes, and other exciting features to turn this game into something unique.”

“It's hard to say how long the title will be in early access. I want to ensure that when I am transitioning from early access to full release the game is 100% workable and enjoyable. A rough estimate of when it could be fully released is around 1 - 2 years, assuming all levels and game modes are completed.”

“With the initial release of early access, there will be one level known as the Old Manor which will be a co-op game mode with up to 4 players.

There will also be one level for the 'Play Alone' mode which is the chapter-based singleplayer game mode.

As for the full version, it is intended that there will be multiple levels, a PvP game mode where one player will control the monster and attempt to stop the invaders. There will also be a single-player mode that will not be based on the background story of the multiplayer levels, but a completely different experience with some story-rich elements.

Plans for the road ahead:

“Currently, Dark Existence has a co-op mode with up to 4 players where you will play together in the level known as Old Manor. The players will also be spawning into a multiplayer hub known as 'The Bunker' where they will pick a map together and play there. You will also be able to work as a team and work out puzzling parts of the map that allow you to progress further.

The game already contains frightening atmospheric realism that really puts you on edge, and intends to become even more terrifying.

There will also be one level available to play for the 'Play Alone' mode.”

“The price will probably only slightly increase when transitioning to 1.0, but no plans are made yet for this and it will vary based on the content that is in the game when in the transition period.”

In regards to when the game is actually released as EA, there will be some systems in place that will allow people to provide feedback, report bugs as well as improvement suggestions of what people would like.

Who am I and why am I making this?

"I've been working as a game developer for the last 10 years, working in the industry as well as for self-training myself in a variety of development tools that allow me to make something truly awesome.

I started this project 'Dark Existence' right when COVID-19 hit. I found myself with a lot of free time on my hands. I created a prototype of this project back in 2015 and decided that now is the time to make it become alive and actually create something as dark as my nightmares.. That's a joke, I have good dreams!

Anyway, the project was intended to be for singleplayer, but I thought after being a big fan of cooperative games, how awesome would it be to play an extremely terrifying game alongside your friends? That's what I want to make. It's a huge challenge jumping into the world of network programming for my first time, but a challenge is what gets me going.

There will be a bumpy road ahead working alone, but I hope with the support I get from other awesome horror fans, we can make this game become what I envisioned.

Thanks, and hope you enjoy Dark Existence!"”

The year is 2036. You are a survivor living in an underground bunker alongside other survivors. The bunker is home to an organisation of scientists who conduct research and experiments on unknown phenomena related to the extinction event. It is your job to ensure that supplies are brought to the bunker as well as test subjects for the scientists to operate on. This requires going to paranormal sightings and capturing whatever objects or creatures you come across.

The world is full of these creatures and it is up to you and your friends if you choose to go with others, to make sure that you successfully capture one of them. 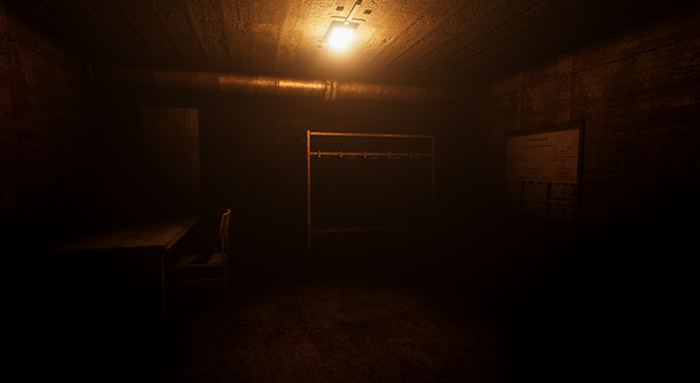 The underground facility where you currently live is classed as the 'Multiplayer Hub'. All players spawn here together when hosting/joining a server. In the bunker, you will have the freedom to explore and investigate cases. You will also see the creatures that you have previously captured. 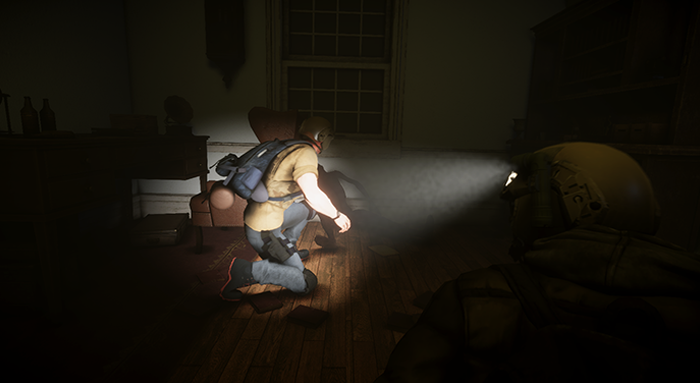 OLD MANOR ON THE HILL

One of the first places you will travel to from the bunker is the Old Manor, located a few hours away. There are reports of paranormal activity within the Old Manor from passing survivors. They have reported a strange figure staring out the window, and strange sounds coming from inside. You have been tasked to go inside and investigate the cause of this activity.

In Dark Existence, you will play as a survivor who is trying to fix some of the damage made from the extinction event. You will be checking out places close to the bunker to see if anything of value can be resourced. Your main task however will be investigating paranormal activity which will involve a lot of stealth within dark and dangerous environments.

In the Old Manor, there is an old woman that has had her body taken over by an evil presence, she is smart, she can see very well. But she doesn't hear very well. So stay out of sight.

As you work through the stages of investigating, you may find she becomes harder to evade. Discover her weakness. You must find a way to capture her, just be careful; she doesn't react well to being hurt.

You can play alone, however, this is not recommended. You may play with up to 3 other friends that dare to enter the halls of hell with you. Look out for wardrobes, kitchen cupboards, anything with a door as you might just find something that will allow you to progress further.

Dark Existence contains graphic violence such as blood, gore, and dismemberment of bodies. It will also contain psychological frightening scenes that are not for children.