Cyber Knights is a tactical RPG that plunges you and your team of hackers, mercs and thieves into the neon-soaked future of 2231. Hire the right team under the crumbling New Boston Zone and mix stealth, hacking and combat skills to claw your way to the top of the criminal heap.
All Reviews:
No user reviews
Release Date:
Developer:
Trese Brothers
Publisher:
Trese Brothers
Popular user-defined tags for this product:
RPG Indie Turn-Based Turn-Based Combat Cyberpunk Tactical RPG Turn-Based Strategy Strategy Tactical Story Rich
+ 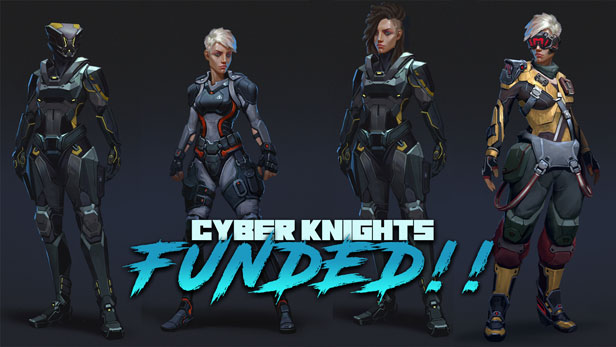 Join us on Kickstarter to pre-order the game, join the private alpha team and score exclusive digital rewards! The campaign is now fully funded in its first 12 hours and will run through March 6th, 2020. If you don't want to pledge, Wishlist on Steam!

Explore the dystopian cyberpunk future of 2231 as you command a company of shadow mercenaries working for the highest bidder. Cyber Knights wraps a world full of consequential story choices and significant character development around a rich core of classic and new mechanics. The game combines tactical elements like stealth, hacking and tense combat with strategic features like base building, contact management and in-depth squad customization. Cyber Knights invites you to jack in and explore a unique cyberpunk world and the immersive, human stories of your merc team in the dark future of 2231.

Cyber Knights strikes a unique tone with a futuristic setting that has passed through the messy near-future to arrive at dystopian 2231. Man-made environmental disasters have ravaged our biosphere. Artificial consciousness has been created, subsequently murdered, and then strictly outlawed at a global level. Megacorporate colonies and research stations dot the solar system from Venus to Jupiter. Quantum computing has radically altered the digital landscape and the very meaning of privacy and digital security.

The game's threaded stories originate from both inside and outside your team -- weaving together threads from your hired mercenaries, criminal connections and history that just won’t die. These stories operate on three interconnected and at times overlapping levels -- personal stories (your team), contact stories (your employers) and event stories (city-wide).

And every choice you make and mission you run will impact your character's permanent Traits, changing them in both subtle and big ways. Their stories and your choices combine to create a unique narrative for every game, every Knight and every team.

The second game our studio created, Cyber Knights RPG, took hundreds of thousands of gamers on an gritty cyberpunk roller-coaster, trying to get rich or go down shooting. The classic Cyber Knights has always had a huge following within our community and we are xcited to come back to the world and stories we started creating there so many years ago with an all new game, Cyber Knights: Flashpoint.

We’re weaving together the genre’s classic themes with the unique setting and history of Cyber Knights to create some of the most cutting, gripping and human stories we’ve ever told. Betrayal, sacrifice, trading away humanity for an advantage, living fast and dying young, revenge and testing the bonds of friendship and trust -- it's all here under the New Boston dome.