Contains online battles, all arenas, and 10 premade drones to unlock!

No one gets hurt, at least they say so.
In community created arenas you compete with self-designed drones in order to become the smoothest drone operator in the galaxy.

Experience what it means when you combine classics like Unreal Tournament and Descent and spice them up with fresh ideas from creative designers and a dedicated community. Try the free feature-limited demo and decide if you want to support the game!

3-dimensional, fast paced and direct, stealthy or brute force action, team based or lone wolf, racing or fighting, you make it what you want it to be. You can amplify your drone piloting skills by creating the unique set of drones that compliment your playstyle and adjust in realtime to whatever challenges other players impose on you. With an infinite supply of community created arenas, which rank from fresh, over trending, to hot on the DRONE community hub, you can be sure to always have a challenge worth to take on. Heck, you may even create your own arenas, tournaments, and rulesets gaining yourself a reputation as an awarded architect.

NOTE: Arena sharing is in development and not yet available. The feature will become available once it is ready to test with the community.

Participating in early access is an investment in the future. Don't expect a final game right away! 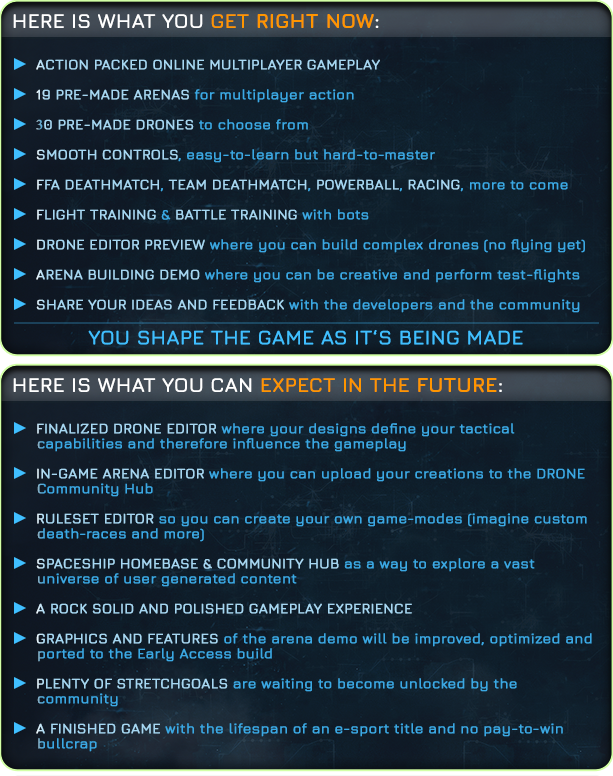 By purchasing the Traveler Edition, you are supporting the development of DRONE and getting the "Traveler" crowdfunding tier unlocked for you. Among other perks, this tier grants you early access to every feature as it is developed and, of course, you will receive a digital copy of the final game once it’s done.