We Who Are About To Die

We Who Are About To Die
Developer
Jordy Lakiere
Publisher
Jordy Lakiere
Fight your way through spectacles and arenas from lowly slave to Grand Champion. Or... die trying. In this unforgiving ARPG Roguelite made by one developer you will face your enemies in gladiatorial combat, using a unique physics based combat system. To those who are about to die, I salute you!
All Reviews:
No user reviews
Release Date:
Developer:
Jordy Lakiere
Publisher:
Jordy Lakiere
Tags
Popular user-defined tags for this product:
Early Access Fighting RPG Swordplay Gore Physics PvE Medieval Perma Death Action Character Customization Hack and Slash Tactical Singleplayer Action RPG Indie Simulation Action Roguelike Combat Difficult
+
Reviews
All Reviews:
No user reviews

Languages:
English and 1 more
Title: We Who Are About To Die
Genre: Action, Indie, RPG, Simulation, Strategy, Early Access

“As a solo dev I absolutely need quality feedback and time to develop the game after its been put in your hands! Great feedback can only happen when people are already playing WWD (We Who Die).”

“Progress speed is extremely hard to estimate as a single developer. I expect at least 8-12 months of Early Access,. My aim is deliver a great game - this can take time. Expect frequent meaningful updates with a fully transparent development process.”

“The game will enter Early Access with most major core features implemented and a fully playable experience with character growth and progression, as well as enough content to keep the game fresh. (eg. most planned arenas are already in the game)

The game will exit Early Access (v1) with much more content (equipment, music, art, random events) and a lot of new secondary features focusing especially on career management and character traits. It will also include iteration on the combat system and many balancing changes as well.

A full list and roadmap can be found on the Official Discord channel!”

“The game already has all major core features complete and has a good chunk of content ready. Complex physics based combat, a roguelite experience with progression and RPG features such as skills and customisable equipment. All features listed in the 'About' section are already implemented.
Balancing issues and bugs may (will) of course exist. The game will be more optimised at full release also.”

“The price will remain consistent at full release.”

“I personally read most bits of feedback and really take suggestions to heart. I feel I have taken the game as far as I can on my own, now - together with the Steam and Discord community - I hope to shape the game to its final state.”

Planned Release Date: When it's done! The only responsible answer.

Join the We who are about to Die Playtest 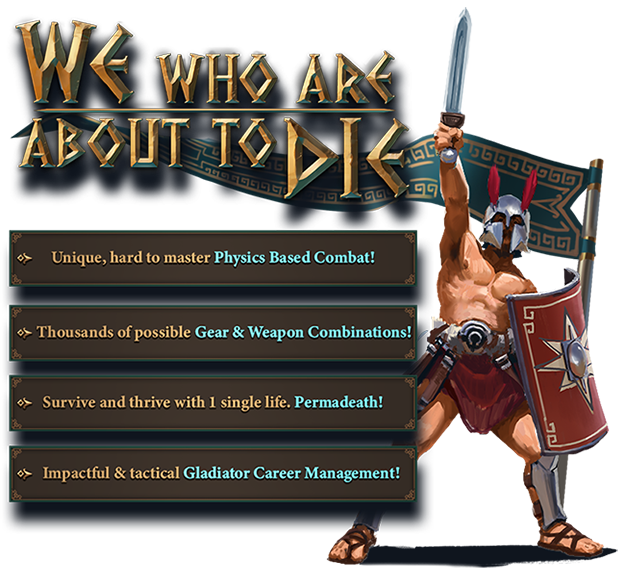 IMPORTANT: This game actually has a unique/different combat system!

Get ready to re-learn how to fight. It will take time to master! Don't worry - gladiators are meant to be sacrificed...
This game features a deep complex physics based combat system, designed from the ground up. You will never sit there while an animation plays - you control your character, based on complex inputs, at all times. Make up your own moves, fight in your own style.

In “We who are about to Die” (We Who Die - WWD) you take control of a brand new randomized gladiator with a single life, that you lead to an inevitable deat- I mean, to victory and glory! Fight from the Pits to the Arena into the Stadium, pleasing larger and larger crowds until you finally become a legend of the Grand Stadium... or gloriously die trying. Often.

Buy or loot gear and outfit your gladiator piece by piece!

Along the way you earn weapons and armor, outfit your character and master the innovative and unique physics based, dynamic, directional combat system.

Fight alongside allies against groups of enemies, or take on tense one-on-one duels that test your skills.
Try your luck in the many unforgiving arena’s this game has to offer -- how long can you last before your inevitable glorious death?

To those who are about to die, I salute you!