The world is a vast, beautiful and dangerous place – especially when you have been shrunk to the size of an ant. Can you thrive alongside the hordes of giant insects, fighting to survive the perils of the backyard?
Recent Reviews:
Very Positive (925) - 88% of the 925 user reviews in the last 30 days are positive.
All Reviews:
Very Positive (14,024) - 88% of the 14,024 user reviews for this game are positive.
Release Date:
Developer:
Obsidian Entertainment
Publisher:
Xbox Game Studios
Popular user-defined tags for this product:
Survival Multiplayer Adventure Crafting Co-op Base Building Action Open World Survival Craft Horror Open World Early Access Exploration Online Co-Op First-Person Singleplayer Sandbox RPG Third Person Funny Cute
+

“From our previous crowdfunding experience, we found incredible value in involving the community early in the process. Early Access gives us the ability to receive and implement community feedback in a way that helps us more nimbly build a better game. Grounded is the type of experience in which community feedback will be critical, and Early Access will enable that feedback loop from the very beginning.”

“We want to make the best experience possible and putting an exact timeline on an early-in-development game is very challenging. That said, we also want to be transparent with our community, so we will give you our best guess with the understanding that these plans may change. The current target for Grounded’s full release is sometime in 2021.”

“There is a ton of great content we want to deliver with Grounded, but more importantly some of the ideas and features may change dramatically based on the feedback we receive from the community. Our current plan for the full release is to have the following features:

“At the start of Early Access, the following features/content will be available in Grounded, but all content should be considered work in progress:

• Groundwork laid out for our intended storyline
• 3 major biomes – the grasslands, the hedge, and the haze
• Crafting
• Base building
• Single player and online co-op play
• First two tiers of weapons and armor
• At least ten insects
• Arachnophobia mode”

“We greatly appreciate the willingness of our community to support and engage with the development of Grounded. Therefore, early supporters will receive a benefit since we will gradually increase the price of Grounded in early access as we add more content and features.”

“We want to create as many opportunities as possible for our community to engage with us and provide feedback. Whether it is our development blog, discord server, or monthly dev diaries, we will be listening, discussing, and incorporating your feedback from start to finish.” 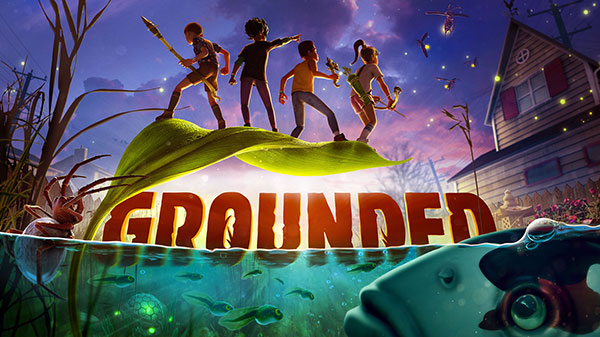 The Koi Pond update is here! Come check out Grounded's largest Early Access update yet, and take a look at our news post for a big preview!

The world is a vast, beautiful and dangerous place – especially when you have been shrunk to the size of an ant. Explore, build and survive together in this first person, multiplayer, survival-adventure. Can you thrive alongside the hordes of giant insects, fighting to survive the perils of the backyard?

Explore this immersive and persistent world, where the insect life reacts to your actions.

Shelter and tools are critical to your survival. Build epic bases to protect you and your stuff from the insects and the elements. Craft weapons, tools, and armor, allowing you to better fight, explore and survive.

You can face the backyard alone or together, online, with up to three friends - the choice is yours.

Uncover the secrets lurking in the shadows of Grounded as you freely explore the backyard and progress through its mysterious story.