“Our Early Access launch is only the beginning of our very long term support for the game. By opening up development through an Early Access phase, we can more easily accommodate the many interesting ideas that players may come up with.

As a tiny indie team of just three people, budget is also always an issue. We didn't want to go the Kickstarter route where projects can sometimes overpromise and underdeliver. With an Early Access release, players can also support and keep us afloat but they also now have access to a fully playable game.”

“Early Access would last at least a year. This is a type of game that can be expanded indefinitely, and as long as we can afford it, our wish is to be able to indefinitely support it with more updates even after it exits Early Access.”

“You can check out our Living Roadmap to see an overview of what we intend to put into the game during Early Access. We call it a Living Roadmap because it is subject to change based on community feedback - that also includes the order in which we prioritize each milestone listed there.

Our main priority during this Early Access phase is to provide the game with enough content so that each playthrough would offer distinct experiences and surprises. Once we've achieved this goal, we will move on to Full Release. This does not mean an end to updates, though.”

“The Early Access version is a fully playable game where you can generate procedural worlds populated by various factions, monsters, landmarks, items and biomes. You then choose from three different Archetypes - each one a distinct playstyle with its own unique set of abilities.

This random world generator is still a work in progress and we don't expect it to be fully entertaining yet until we have enough content that it could always successfully generate unique and interesting situations. Therefore, we also included 5 custom scenarios with interesting setups and features and with high replay value like the demo's tutorial scenario.

More would be added every milestone. These are our "ideal" worlds and it is indicative that we are nearing the end of our early access phase once the random world generator can consistently produce similar worlds.”

“We plan to release major updates once every two months. We intend to be active on the Steam discussion boards and on Discord to interact with players and gather feedback and criticisms. This will aid in our iterative design process and help us assess whether there needs to be adjustments in the road map to address player issues.

While it is important to us to be true to our own vision, we understand that listening to outside feedback is essential.”

“Ruinarch appears to be Dwarf Fortress or Rimworld for evil bastards, putting you in the spiked boots of an evil overlord watching over a simulated fantasy sandbox.”
RPS 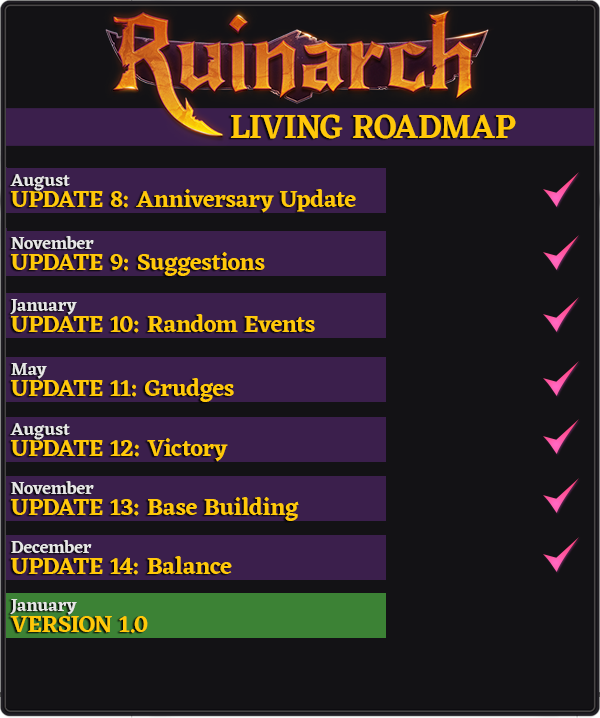 Ruinarch is a simulation sandbox game where you create obstacles and cause conflicts in procedurally generated fantasy worlds. Inspired by story generator games like Rimworld and Dwarf Fortress, weaving tales of both anguish and humor is central to Ruinarch’s gameplay. The game gives you all the infernal tools you'll need to toy with people's lives and relationships.

There are many ways to be evil. Choose from three overlord Archetypes - each one provides you with a different playstyle. Do you want to focus on sheer destruction or are you into a more subtle puppetmaster approach?

You can experiment by combining destructive spells.

The most straightforward way to wipe out villagers is to simply cast powerful spells like Meteors, Earthquakes, Fire Balls, Lightning and more. But what happens when you hurl a meteor at a poisonous puddle? Poisonous meteor explosions, that's what! And that's just one of the many nefarious ways that you can combine elemental interactions to create your personalized cocktail of destruction!

Continue to sinisterly interact with the world to produce Chaotic Energy and then use these dark powers to upgrade your Portal. You gain permanent access to more heinous Powers by upgrading the Portal. Once the Portal is at the maximum level, you will finally be able summon yourself into the world and win the game!

You can afflict villagers with flaws.

Sure, you could just destroy the world with ice and fire, but the real fun begins when you meddle with villager lives to put them into compelling and tragic situations! Afflict the local hero with Lycanthropy and watch as his once loyal friends turn on him when the full moon rises. Afflict an annoying husband with Unfaithfulness and then watch the fireworks once you tell his wife of his misdeeds.

You can spawn monsters to kidnap and harass villagers.

You can snatch or seize a roaming monster and then breed it in your Kennel. This will allow you to summon them as part of your monster parties. Create monster parties to snatch Villagers or raid Villages. Your corrupted versions behave differently from their wild counterparts as they have been bred to perform very specific functions.

You can spread malicious info.

Your Beholder Structure allows you to spawn Eyes all over the world to gather information. You've seen a Knight steal a Shaman's Potion? Store it as an Intel and then tell the Shaman about it!

You can spread Plague.

Build the Biolab to afflict Villagers with Plague and summon Plagued Rats. Upgrade your plague to instill it with various nasty symptoms and improve its virulence. You can even make Plagued victims explode when they die!

You can torture people.

You can build a Prison and incarcerate villagers. If necessary, you can torture them in ridiculous ways to afflict them with random flaws. Perhaps someone will have a mental anguish and become a Serial Killer when it gets back to its village?

You can brainwash folks into becoming cultists.

You can also try to brainwash your prisoners. If successful, it will return to its village as a secret cultist who will quietly worship and aid you.

You can start a zombie apocalypse.

You can also make the Plagued dead rise as zombies. Other villagers that they attack may also contract the virus. Soon, the entire village will be filled with nothing but shambling zombies.

You can make Vampires and Werewolves.

Afflict a Villager with Vampirism or Lycanthropy to turn them into denizens of the night. Watch as they terrorize their neighbors and spread the curse! You may eventually see the Village fight back and start Vampire and Lycan Hunts.