Whether you are drawn to Gloomhaven by the call of adventure or by an avid desire for gold glimmering in the dark, your fate will surely be the same. Gloomhaven, the digital adaptation of the acclaimed board game, mixes Tactical-RPG and dungeon-crawling.
Recent Reviews:
Very Positive (126) - 83% of the 126 user reviews in the last 30 days are positive.
All Reviews:
Very Positive (939) - 81% of the 939 user reviews for this game are positive.
Release Date:
Developer:
Flaming Fowl Studios
Publisher:
Asmodee Digital
Popular user-defined tags for this product:
Early Access Tabletop RPG Strategy Adventure Board Game Turn-Based Dungeon Crawler Turn-Based Strategy Turn-Based Tactics Early Access Card Game Singleplayer Hex Grid Fantasy Replay Value Difficult Roguelike Dark Fantasy Co-op
+

“Gloomhaven is based on the hugely popular physical board game of the same name and features 17 playable characters, 47 enemy classes and a campaign with 95 scenarios. To put it bluntly, it’s an absolute behemoth! To release everything all at once would be a challenge to say the least.
For the digital version, we have created a brand-new roguelike version of the game called Adventure Mode that features the exact same core gameplay as the board game, but with procedurally generated scenarios and a new approach to items and abilities for your party.

All this combined means that we have a unique experience for both players new to Gloomhaven, as well as the most dedicated fans, with the ability to gradually extend the content as we progress through development. As the crowning finale, at full launch we will include the full campaign from the physical board game and our unique Adventure Mode filled with all the playable characters and enemies.
Without a doubt, the best thing about this approach is that we get to make the game alongside the community. We know that you all share our passion for Gloomhaven and we are excited to be able to develop this game together to make the best possible digital adaptation of Gloomhaven!”

“Currently we are planning to be in Early Access for at least 9-12 months as we want to work side by side with the community to create more new features and unique content, including that which doesn’t already exist within the board game.”

“During Early Access we will be adding more playable characters, items, enemies, bosses and environments to our Adventure Mode, alongside features such as Character Perks and Ability Enhancements. We plan to bring all the content from the original board game — and even more with digital exclusive enemies and bosses.
Isaac Childres, designer of the original board game, has been closely involved in the development and design of the digital adaptation, with every artistic and design choice personally vetted by him.
At full launch, we will deliver the complete board game campaign experience to the digital edition as well as the highly anticipated and requested multiplayer coop mode.
If you have purchased the early access, all additional full launch content will be free.”

“At the launch of Early Access, you will get 4 playable characters, 9 enemy classes—with both standard and elite variants—and 3 bosses to take on, all through our roguelike Adventure mode. The Adventure Mode will have you explore an entirely new map created with the assistance of Isaac Childres, completing dungeons, visiting towns and eventually, fighting epic bosses.”

“We love building games with the community and are keen to involve our players in as many ways as possible. We will have beta branches available for players to test and provide us with feedback on the latest updates, along with ongoing discussions on Steam and Discord around design ideas and feedback. We are also providing some limited modding support during early access and are keen to expand that further, based on requests from the modding community.”

Whether you are drawn to the lands of Gloomhaven by the call of adventure or by an avid desire for gold glimmering in the dark, your fate will surely be the same.
Gloomhaven, the digital adaptation of the acclaimed board game, mixes Tactical-RPG and dungeon-crawling. Its challenges, legendary for their unforgiving nature, reward only the most daring players with the sharpest minds. With your party of fearless mercenaries, you will carve your way through terrifying dungeons and dreadful forests filled with increasingly horrific monsters to reap the rewards…or die trying.

In the digital adaptation of Isaac Childres’ ultimate strategic board game (6 Golden Geek awards, “Board Game of the Year” in 2017), developed by Flaming Fowl Studios, you play as a squad of 2-4 mercenaries each with a huge selection of unique abilities.

Acclaimed by both board game players and critics (highest rated game of all time on http://BoardGameGeek.com), this turn-based tactical RPG set in a unique medieval dark fantasy universe, rewards strategic planning and problem solving. Prepare yourself fully for every journey by picking your party members and their abilities wisely, because in the turmoil of battle, your team synergy and tactics are all that will give you the upper hand. The world of Gloomhaven is unforgiving, so if you enter a dungeon ill-prepared, don’t expect to leave.

If you survive your perilous journey, you’ll gain the opportunity to purchase new gear and unlock new abilities & new perks. Those party improvements will help you to overcome malicious bandits, hordes of wild beasts, horrifying demons, or whatever else may find itself blocking your path. Nevertheless, there’s more than just one way to crush your foes and no decision should ever be made lightly, so advance with caution! 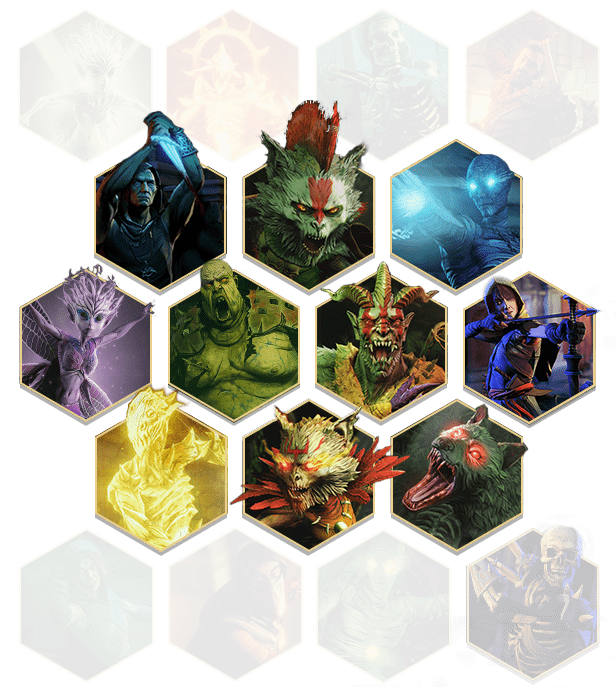 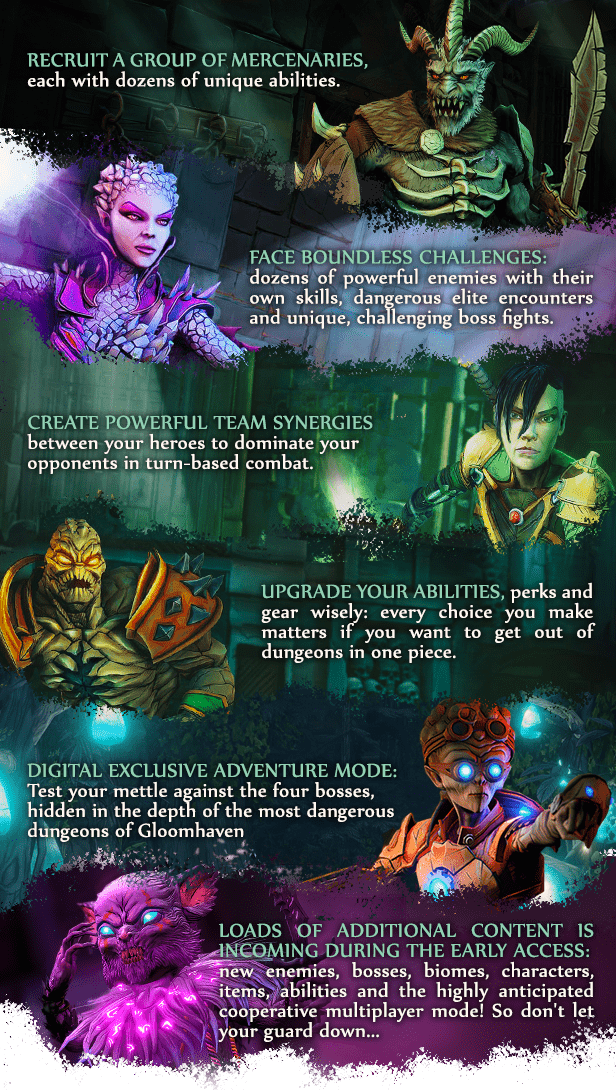