The Boogie Man
Developer
Uri Games
Publisher
PLAYISM
"You are the player, and must chase the Boogie Man. If you catch him, you win! And that's the happy ending, but if you don't..." This is the third title in the Strange Man series. Keith tours a castle with his wife, Helena. Sit back, and enjoy tonight's entertainment: A horrific display of murder.
All Reviews:
Very Positive (143) - 80% of the 143 user reviews for this game are positive.
Release Date:
Developer:
Uri Games
Publisher:
PLAYISM
Tags
Popular user-defined tags for this product:
Indie Adventure Casual Horror Pixel Graphics Singleplayer Dark RPGMaker Anime 2D Atmospheric Story Rich Violent Controller Great Soundtrack Surreal
+
Reviews
All Reviews:
Very Positive (80% of 143) All Time

"You are the player, and must chase the Boogie Man.
If you catch him, you win! And that's the happy ending.
If you don't catch him, you lose, and what awful bad ending may await you then?"

This is the third title in the Strange Man series, developed by Uri Games.

After Keith takes his wife, Helena, with him on a mandatory holiday at a castle, Helena makes a startling confession.

You play as Keith, a cold detective, sent on a work vacation by his boss. After arriving at the castle him and his wife take a tour of, the Boogie Man appears, and in his wake, murders appear.

As Keith is obsessed with protecting people after his son’s death, he chases after the Boogie Man, in hopes to end the murders and the frightful night of “entertainment”.

The Steam version features special additions such as achievements and multi-language localization.

Discover the full The Strange Man series in our special bundle! 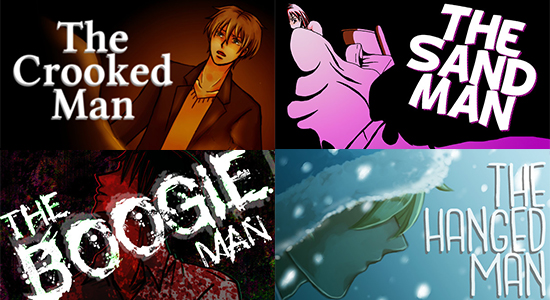