“We want to know what you think! We always paid great attention to feedback, and introduced a lot of improvements over the course of development, which were suggested by our Kickstarter backers and other great people who played the demo. And of course, by participating in Early Access you're also supporting Minotaur and the whole Universe of Seven : )”

“We plan to complete Minotaur development within the next two years. Of course, this time also depends on the amount and content of the feedback we get!”

“Full version will include the remaining routes and all the game endings. We also hope to enable support for game mods and include a set of alternative outfits (one for each character).

Oh, and we'll make sure to prepare a couple of surprises for those who think they've squeezed everything out of already released routes. (– _ 0)”

“Current version includes fully completed routes of two characters — a synthet guy whose name is Nod, and Mentor-15, a teacher android model. We really mean it when we say "fully": all endings, movies and in-game collectibles are there, and there's a complete English voice over done by a great cast. Depending on how fast you read and solve puzzles, that's approximately 4-5 hours of gameplay.

Nod's route is the longer one, and he unlocks (or fails to unlock... that poor girl) the other routes during his wild Royce apartments run. Of course, Ollie would object and say that it's her story, not Nod's. She might be right.”

“Price after Early Access will probably be higher. But not by much. But higher.”

“We're happy to hear your thoughts and opinions on any channel at our disposal. However, we also have a Trello board set up just for that purpose. It's a great way to provide and collect feedback, and to lure you in, we've added cards with a lot of additional lore, Easter eggs and full HD art. So do check it out! https://trello.com/b/1xhAYNCG/minotaur-feedback-board”


Read more
Check out the entire indienova franchise on Steam 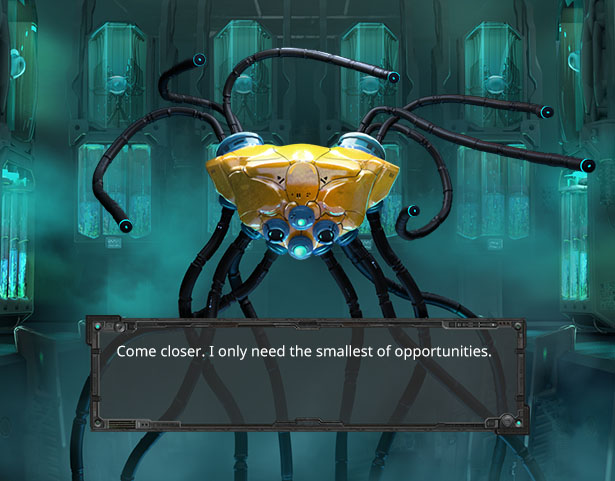 Minotaur is an adventure game set in a new world called The Universe of Seven. Here’s what we hope you’ll love about it:

Minotaur’s story is mainly focused on nine characters who come to find themselves trapped in their apartment building. Nod’s route, which is fully available in this Early Access release, follows a synthet named Nod Pikes as he attempts to escape and come to terms with his past – with help (kind of) from his lovely sharp-tongued AI assistant Ollie. Just like the game overall, Nod’s route has multiple endings. We call them: wicked, sad, very sad, brutal and shocking. Take your pick! Update: the next route has been released! Join Mentor-15, a teacher android model, on her journey of self-discovery.

A couple more notes about the story:

Minotaur has point and click mechanics at its core, so we’re trying to make the process of pointing and clicking as engaging as possible. You’ll be solving many different puzzles, fighting ancient creatures, and even climbing lots of stairs. Hm… That last one sounded much better in our heads. It’s actually one of our favorite parts!

We’re spending a lot of time on making the world of Minotaur feel alive and immersive, and we think that graphics and animations play a huge part in that. Check out our Early Access trailer – everything in it has been captured directly from the game.

It’s good. Really. We’ve listened to thousands of tracks, and picked the best of them.

We often say Minotaur is a cyberpunk game, but that’s just us trying to sell it. In truth, its world is more of a science fantasy setting, and we’re obsessed with having it figured out down to the tiniest detail. Why else would we make a whole website dedicated to its lore?

Are you not convinced yet? Syl, and that was us at our best. How about trying out the demo then? We’re sure that the beginning of the story will pique your interest. And if you get stuck, feel free to use a spoiler-free walkthrough on our website.