ZANGEKI WARP is the newest game from Japan’s doujin shooting game specialists ASTRO PORT.
Take control of the hyperdimensional fighter craft ‘ZanFighter’ and use its advanced warp functions to defeat an army of space beasts controlled by an evil scientist!

ZANGEKI WARP’s warp capabilities bring a new twist to the style of Gradius, R-Type, and X-Multiply, and are the key to overcoming thrilling stages filled with traps and obstacles that would be impossible in regular shooting games. Use the warp functions to stop time, instantly warp through enemy fire and obstacles, and even to destroy enemies.

The year is 2054, and the galactic civilization faces an imminent threat of annihilation. Vicious BEMs (‘Bug Eyed Monsters’) developed by the evil genius scientist Doctor Benomiya have escaped containment and gone berserk.

The Super-Electric Research Center deploys the space combat craft ‘ZanFighter’ to the fortress of Benomiya on a mission to end the onslaught of the BEMs before they end civilization.

The small, but powerful ZanFighter is equipped with the super weapon ‘Warp Slash’, which makes it the only craft capable of surviving the myriad of traps in Benomiya’s fortress and countering the BEM menace.

The battle begins: Earth’s most powerful combat craft against the galaxy's deadliest threat.

ZanFighter specializes in close combat and possesses a variety of special capabilities including ‘Warp Slash’ and ‘Dimensional Shockwave’. Its sophisticated and highly advanced automated systems allow its pilot to concentrate on maneuvering, firing the weapons, and effectively utilizing the warp functions listed below.

Warp Slash
The Warp Slash is a more advanced version of the ‘Tokitome Warp’ used by the combat android ‘Meguriro’ during the Gogoh War of 1977. When activated, the warp effect stops time and transmits the ZanFighter almost instantaneously to the designated coordinates.
Warp transmission utilizes multiple dimensions, allowing the ZanFighter to pass through any type of physical matter, including enemy bullets and obstacles. At the same time, it inflicts slicing damage upon any enemies that lie in the path of the warp. 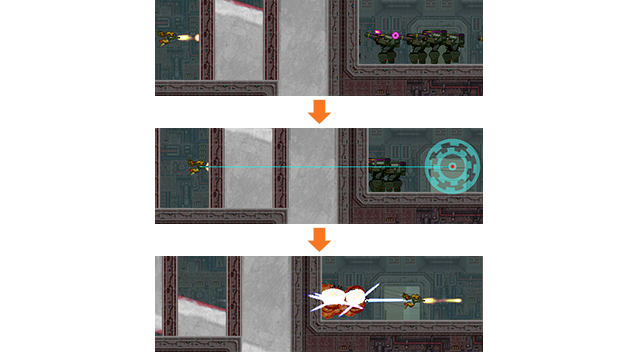 Dimensional Shockwave
This area-effect attack inflicts damage upon any enemies present at the warp destination upon completion of the warp. Both the ‘Dimensional Shockwave’ and ‘Warp Slash’ make use of the distortion in the fabric of space caused by warping.

Decoy
Projects a holographic image of the ZanFighter at the warp origin. The hologram acts as a decoy, distracting enemy visuals and sensors, and drawing their fire. Decoys will disappear after a set amount of time, but a new Decoy can be redeployed at the ZanFighter’s current position when the warp is engaged again.

Magno-Electric Shield
A defensive shield that can protect the ZanFighter against one enemy attack. The shield activates when the shield energy reaches full charge. Shield energy charges automatically and also increases when enemy capsules are collected.

Omega Crash
Triggers when the Magno-electric Shield deactivates. Massive energy stored in the shield is instantly released, inflicting large damage on enemies in the surrounding area. This weapon that can turn the tables of a desperate situation.