Red Comrades Save the Galaxy: Reloaded

Red Comrades Save the Galaxy: Reloaded
Developer
Buka Development
Publisher
Buka Entertainment
Vasily Ivanovich Chapaev and his fellow aide Petka realize that someone has stolen the Red banner from the HQ. Although it's not the end of the story yet! Somewhere on the moon, legions of alien invaders prepare to conquer Earth. But could such a little thing really give a scare to the Red Army heroes?
Recent Reviews:
Very Positive (10) - 80% of the 10 user reviews in the last 30 days are positive.
All Reviews:
Very Positive (542) - 92% of the 542 user reviews for this game are positive.
Release Date:
Developer:
Buka Development
Publisher:
Buka Entertainment
Tags
Popular user-defined tags for this product:
Adventure Comedy Point & Click Dark Humor Hidden Object Atmospheric Classic Puzzle 2D Singleplayer Time Travel Third Person Politics Dynamic Narration Surreal Unforgiving Cartoony Funny Cartoon Conversation
+
Reviews
All Reviews:
Very Positive (92% of 542) All Time
Recent Reviews:
Very Positive (80% of 10) Recent

Check out the entire Buka Entertainment franchise on Steam

The world of Deck of Ashes has expanded with the new DLC “Tome of Dimensions”. Meet Sibyl the Dark Soul, a lone but fearless fighter looking to bring her race back from extinction. 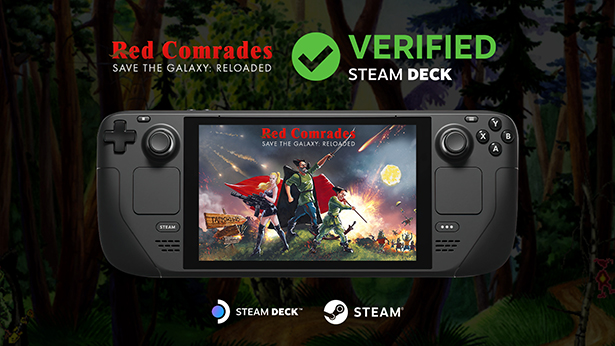 Almost 17 years on, we bring you back the true Russian video game industry classics, remastered for modern platforms.

The first part of this classical game series will be released on PC on February, 5th . The game saves the original graphics and voicing but the game code has been completely rewritten for Unity engine and it has widescreen support now. Any animation issues and old bugs have been fixed. Steam achievements and trading cards are also available. So from now on you can play in Red Comrades Save the Galaxy using any modern PC working on one of modern operating systems!

Russia is in a midst of Civil War. Both the front line and Ural River splits the village Backwoods in two. One part of the village is somehow controlled by the brave Red Army division headed by Chapaev. Remnants of the cowardly Whites are still comfortably stationed on the other side.
Vasily Ivanovich Chapaev and his fellow aide Petka wake up to find themselves in a bad hangover and in a worse mood. They realize that someone has stolen the Red banner from the HQ. Our heroes are totally depressed with such a misfortune, just like every decent Red army fighters should be.
This unbearable offense leaves them no choice but to sneak into the enemy territory and to retrieve the precious banner.
Although it's not the end of the story yet! Somewhere on the moon, legions of alien invaders prepare to conquer Earth. But could such a little thing really give a scare to the Red Army heroes?

©2015 Buka Entertainment. All rights reserved. All other trademarks and copyrights are the properties of their respective owners.