Battle of Empires :1914-1918 is a story driven RTS, that re-lives some of the bloodiest battles of “The Great War”. The missions include some of the most fearsome weaponary employed of the period. Sabotage, stealth, trench warfare, gas attacks, artillery and mobile infantry - BoE has it all!

Battle of Empires 1914-1918 - is a massively imposing RTS set in the height of World War I. At the moment, the full version of the game includes 6 storyline campaigns and developers continue to craft new ones. 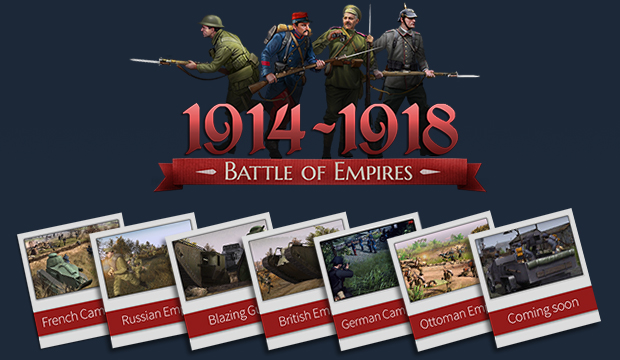 Each campaign reveals particular combat features of the Great War, as well as showing the staggering combat paths of each participating country.
The campaigns can be played solo, as well as in cooperative mode. Moreover, the most experienced players can join the multiplayer battles, with 6 playable nations and a variety of game modes.
In addition, several multiplayer historical reconstructions portraying some of the collosal battles of the First and Second World War are available as a gift.

Gameplay is similar to other Men of War based titles, with the ability to control your men, at divisional, squad and soldier levels.
The graphics have been developed to show the beauty and horrors of The Great War.

So what are you waiting for soldier? The battlefeild awaits your command!

We have provided a flexible purchasing system that allows you to choose the optimal configuration of BoE, at a reasonable price according to your gaming style and budget. This allows you to enhance the base game with additional content by purchasing DLC’s individually, or as a bundle.