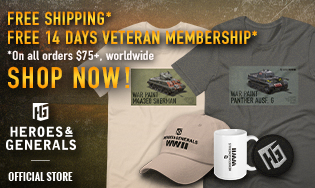 “Unlike traditional lobby based shooters, Battles fought within Heroes and Generals contribute towards a persistent overworld based on real areas of Europe during WWII.”
4.5 / 5 – MMO BOMB

“There is nothing more satisfying than dropping down from the sky and landing atop a foe whom is hiding in an obscure spot or in other words; camping and then slaying him with whatever weapon you happen to have handy at the time. There are other elements of Heroes and Generals I enjoy but that is certainly the most prevalent of them all.”
8 / 10 – GAMEGRIN

“If WW2 military hardware is your bag then Heroes & General is easily one of the best free Steam games you can get.”
N/A – PCGAMESN

Heroes & Generals is a full on, all-out WAR experience. Thousands of players fighting one massive clash of nations. The first to capture 15 cities takes the glory.

Fight alongside newfound brothers from all over the world in multiple battles raging persistently as Generals strategize and deploy resources to assist their men.

As a soldier everything you do influences the war. Every kill you make, every tank you destroy, every town you capture matters. Even glorious defeat, because sometimes to win the war, many must die.

CHOOSE HOW YOU FIGHT

How you fight and the speed of progression is up to you.

Experience the rush of close quarter combat, the pleasure of picking off the enemy at range, the power of unleashing hell from a tank or wreaking havoc from an aircraft. The choice is yours.

MASTER YOUR OWN ARSENAL

You own and master your equipment.

Unleash the terror of the badass Panther Tank, the power of the Yak-9B fighter’s 20mm cannons, or the stealth of an M8 Greyhound. Load out with the deadly PPS-43, the legendary Tommy Gun or the rare but lethal FG-42.

65+ Weapons, 70+ vehicles and aircraft are available to add to your arsenal. If that’s not enough, you can always use your wrench to humiliate the enemy!

© 2022 TLM Partners Inc. | All Rights Reserved. Brands, product names, and logos are the trademarks of their respective owners

681 Curators have reviewed this product. Click here to see them.