“I want my game to launch into early access because it lacks many features, but is still fun to play.
Along with this, I want to make it a game that I can work on while getting constant feedback from players, recommendations on features to add, and bug reports.”

“I want the game to be out of early access in around two years, but because I am currently in high school, this date might differ based on schedule changes.”

“I plan for the full version of the game to have more game modes, maps, and mechanics.”

“The current state of the Early Access version is smaller and lacking in some features, but still provides enough gameplay and variety to have a good time.”

“I plan for the price of the Coolest Catto DLC to be placed at a slightly higher price once the game nears closer to completion.”

Are you sick and tired of janky, bug-riddled games? If so, I highly recommend you never return to this Steam page again.

If the bugs don't bother you too much, then BUCKLE UP, because you are in for the ride of your life.

Catto Pew Pew! is a chaotic physics-based arena shooter where your shots cause your opponent to fly backward. Smart movement, accuracy, and spam clicking are all seen throughout battles, where getting blasted into the sunset is not an uncommon occurrence. Best played with friends, Catto Pew Pew! serves as a fun, frenzied take on the Arena Shooter genre.

• Duke it out with up to 16 players in one of the fourteen havoc-filled arenas available*
*7 Maps are available with the base game.

Free for All
• Constant action ensues as players constantly respawn 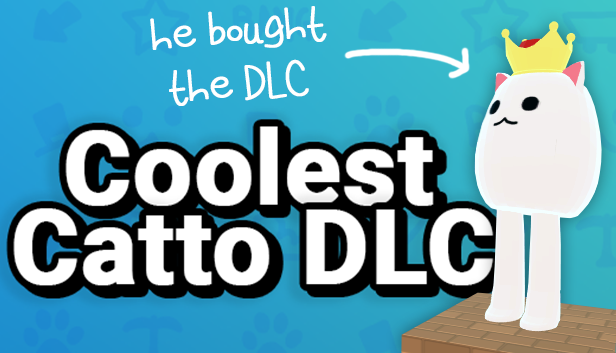 This game is currently in Early Access and will change over time. This means the game is somewhat unfinished but is in a playable state. I plan to update the game with new maps and gamemodes, interact with the community and take suggestions.