Two Worlds Epic Edition
Developer
Reality Pump Studios
Publisher
Topware Interactive
... 300 years after Aziraal has been banished, a brother and sister are drawn into the conflict which has flared up between the Orcs and the free world. Kyra, the hero's younger sister, suddenly disappears in mysterious circumstances.«...If my family really belongs to the chosen ones, why then have we always been as poor as church mice?
Recent Reviews:
Very Positive (16) - 87% of the 16 user reviews in the last 30 days are positive.
All Reviews:
Mostly Positive (2,137) - 76% of the 2,137 user reviews for this game are positive.
Release Date:
Developer:
Reality Pump Studios
Publisher:
Topware Interactive
Tags
Popular user-defined tags for this product:
RPG Open World Fantasy Third Person Singleplayer Multiplayer Adventure Action Medieval Action RPG Story Rich Character Customization Dark Fantasy Magic Hack and Slash Co-op Exploration Classic
+
Reviews
All Reviews:
Mostly Positive (76% of 2,137) All Time
Recent Reviews:
Very Positive (87% of 16) Recent 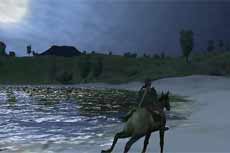