“This game will be released periodically over time. Play the current updates as they come out. I will take back player feedback and suggestions into account when fixing and improving aspects of the game.”

“This game will be in early access until the game has all the chapters of the game completed. A new chapter of the game should be released every 3-6 months.”

“The current version of the game contains the first chapter of Andy's Apple Farm. More chapters of the game will be released as updates come out.”

“The price will not change, even after the full game's release. The game's price will remain the same and will not go down or get higher.”

“I'm planning on sharing development updates, as well as taking in player feedback to help improve the game as it is being created.”
Read more

On this farm, you control Andy the Apple! Meet up with other fun characters such as Felix the Fish, Melody the Moon, Margret the Mole, and Claus the Clock!

Andy and his friends are having fun on this nice sunny day on the farm! Andy's house is missing its key, and he needs your help to find it and get back into his house! Each character has a game to play and playing these games will reward you with "BONUS STICKERS" Help Andy collect everyone's "Bonus Sticker" and they might just tell him where his key might be!

Will you help Andy win back his keys and get back into His house? 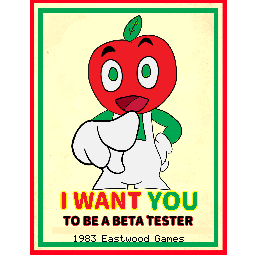 In this game, you play a copy of a fictional beta test version of the game "Andy's Apple Farm", a game that was supposed to be released in the mid-1980s. The game isn't actually a beta test, however, the game's version is designed to appear as one.

The game starts to "glitch" and reveal more of the story behind the game. This game has a lot of secrets to discover so it may require several playthroughs to have different experiences and fully understand the game's internal story.

This game contains scenes of violence/killing, as well as scary imagery, blood, and references to alcohol.