Who's Who?
Developer
G1 Playground
Publisher
G1 Playground
Enjoy an intense game of wits with friends all around the world! Experience a sense of thrill and achievement by becoming the last survivor. Play different modes including "Police and Thief" and "Where`s everybody?".
All Reviews:
Mostly Positive (277) - 79% of the 277 user reviews for this game are positive.
Release Date:
Developer:
G1 Playground
Publisher:
G1 Playground
Tags
Popular user-defined tags for this product:
Casual Action Multiplayer Comedy Funny Battle Royale Arcade 3D PvP Cute Colorful Emotional Modern
+
Reviews
All Reviews:
Mostly Positive (79% of 277) All Time 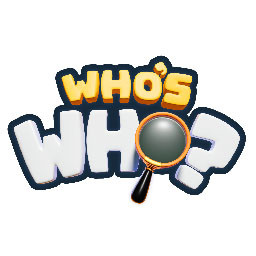 View
all 38
Title: Who's Who?
Genre: Action, Casual

"Who's Who?" is an online party game that you can enjoy with your friends.
Find the real players hidden among the AI characters and be the last one standing!
But be careful! You don't want to be caught either!

Is the character walking toward you real or not?
Keep your eyes open for anything suspicious!

If you think a character is a real player, do not hesitate to attack them!
You only have one chance.

Be the last survivor in this intense game of wits!
The thrill and excitement will get you hooked.

- Various game modes
> Police and Thief Mode:
Tons of magnificent treasures are displayed all over the museum!
Become a thief and steal the treasure without getting caught by the Polices.
Or you can become a Police and catch the thieves instead.

> Where`s everybody? Mode:
In a space where everyone pretends to be an AI character, spot players who are acting suspiciously!
Do not let your guard down until you become the last one standing.

There are several more modes that you can enjoy!

Note: We allow any form of streaming and video recording of "Who's Who?"