“So first off, if you want to play you need to join our Discord (https://discord.gg/ZquSnAGJ63) otherwise you won't find anyone to play with. Now, our vision for the game is one of two modes complementing each other : a fast, competitive mode where players can have the most fun instantly and a persistent galaxy in which players will meet, build bases, create organizations and fight for domination across many servers. The two modes are linked : winning in the arena will give you resources to use in the galaxy. Right now, the arena is ready to play and we are laying the foundations for the galaxy. We think our global vision is strong but we need feedback as early as possible to make a game you want to play. It is now a good foundation for what we intend to build in the coming months so we invite you to join us and play, to iterate on the game's design fast.”

“We plan to add game mechanics, items, a persistent game-mode, an in-game purchase system and fix the bugs and crashes.”

“Right now the main mechanics are in the game: shooting, building, flying, managing inventory, gathering resources. There is one map with four procedurally generated planets for one game mode : competitive mode (an arena). The essential buildings such as walls and floors are available to build bases. The classic weapons (rifle, gun, shotgun, sniper) are also available as well as some equipment (armor and jetpack). Three spaceships for different playstyles are available. Players can play in teams and will win the game when destroying the assigned base core. Expect bugs and crashes. No progression is saved yet.”

“We are building this game with the community. We have a discord server (https://discord.gg/ZquSnAGJ63) to talk directly with you players and we keep the general public updated on Twitter (https://twitter.com/SolysGame) and Instagram (https://instagram.com/SolysGame).”
Read more

Solys is a fast-paced multiplayer FPS, where 3 teams of 3 players compete against one another to destroy the other teams' bases.
Each team spawns on their own island containing a resource generator, a monolith acting as the spawn to be destroyed and a shop.
Players can buy items in the shop with the generated resources, these items include weapons, armor, jetpacks, defenses, ships and building parts.

Ships are essential to access the other teams' islands and to collect resources.
As of now, there are 3 ships in the game being

Base building and defenses 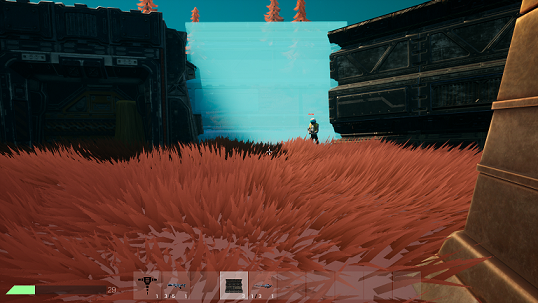 To protect their spawn each team must build around it and place defenses. Place high external walls to prevent players without a jetpack from getting in, stairs to have the high ground on your enemy or turrets to blast any enemy in a close radius. There are other building parts such as walls, a vehicule pad, corridors, doors and so on.

Maybe you like hiding in the bushes with a powerful sniper rifle. Or you'd rather get to close quarters with your enemy and blast them in the face with a shotgun. Maybe you're an average Joe and enjoy our rifle. Either way these 3 weapons cost quite a bit of resources, you'll probably do your early fights with a pistol. To protect against these weapons, buy armor ! If you want to sneak in other bases or have an element of surprise on your enemy, use the jetpack !
All these tools can be combined and used together in fights, all you need to do is buy them and store them into your inventory.