This content requires the base game Evil Genius 2: World Domination on Steam in order to play.

This content requires the base game Evil Genius 2: World Domination on Steam in order to play. 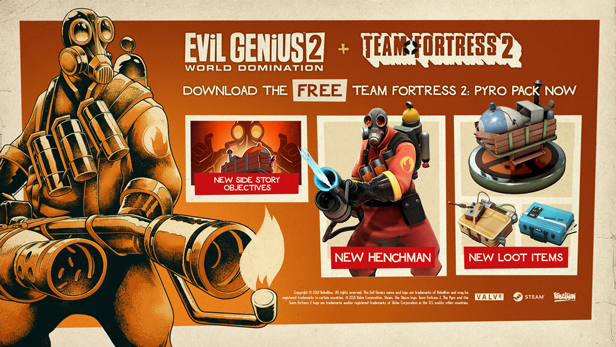 The Pyro is a dangerous, uncontrollable force of destruction who acts without regard for the lives of those around them. Considered maniacal by some, the Pyro is a law unto themselves. They sow fear in their wake. None dare oppose them…
…Maybe you have more in common than you care to admit.

A conflict has broken out as two teams vie for superiority. Stoke the fires and join either RED or BLU to experience a brand new side story featuring the Pyro.

Can you hear the Call To Flame?

Recruit the Pyro as a Henchman and increase your firepower… literally! Pyro can indiscriminately engulf their surroundings in an inferno, fan the flames on those tiresome Agents in the aftermath, and even extinguish less friendly fires with a puff of compressed air…if they must.
What self-respecting Evil Genius can resist harnessing such destructive power?