“The game is in early access state because it is actually not finished yet. A lot of upcoming features are in progress. Also, I would love to get some comments and ideas from players (because I think it is going to be better this way).”

“Approximately 3 months after an Early Access. I have some work to do in studying. So, I may not be able to work full time on developing the game but it is going to be about 3 months if possible (if not, I'll announce later).”

“Full features are mentioned in the game description. There will be a lot of game modes, and variations. Also, many more interesting challenging items, traps, and enemies. The game is going to be optimized well and good enough that the new players won't find any bugs.”

“The main features of the game are involved. You will experience most of the concepts of the game such as maze exploration with fun fights among your friends. In multiplayer session and some game features may have some bug issues which you can report us for further bug fixing. For more feature information you can read the game description.”

“The price of the game will remain the same, but there will be DLCs for you to buy for some more features (ex. custom hats, custom pets, custom color skins, custom item skins).”

“Maze Party is designed to be funny and creative. I appreciate getting an idea from the community. If you find something suspicious or you have an idea to improve or add something, be sure to contact me at the contact email address. For more contact information I may write later on some announcement. Inform me of anything or make a post and I'll go read them for sure!”
Read more

Well, This is a maze game. Uhh... a game to play with your friends as a party: Exploring the mysterious maze, Racing to be the top or fight against each other. Maze party is an online 2-8 players with various interesting game modes in a theme of "MAZE". 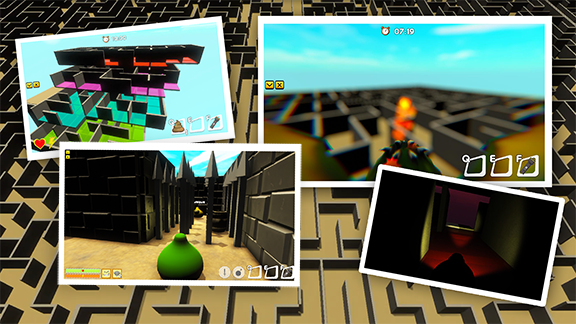 ===== Game mode list =====
- Lair of the dragon: You're in the lair of the dragon. Group up and kill the dragon before it kills you all (1 Player will be random to be the dragon).
- Rainbow tower: A tower of mazes, each color will has different kinds of traps Whoever reaches the top will be the winner! but it won't be easy... some of your friends are looking at you from below.
- Endless maze: Co-op with other players to pass mazes. Try to reach the highest level as ever!
- Deathmaze: Go passes through mazes, that would perfectly be ok except... the last one will be thrown into lava each maze. The last one survived wins.

Hopefully, this is for someone who loves maze(?).
Good luck, have fun! :)