“I've been developing games for many years, but often with no one but myself to make design decisions. I thought it'd be fun to have you guys play alongside the development and help create the game with me through your ideas!”

“In the road ahead, I plan on implementing various new game modes, all centered around the core concept of spotting human players among the crowd. By the end of Early Access, there will be several game modes planned to choose from, designed by both me and (hopefully!) the community.

Additionally, during the next 6-8 months I plan on releasing both new maps and new items at a regular pace.”

“This game is currently in Alpha - The game currently features 4 hand-crafted maps and the core game mode: Diamond Grab, where players walk around the map sneakily collecting diamonds while one player searches for them from above.

Because of its early state and my limited options for QA, it'd be fair to expect some bugs.”

“I plan on gradually raising the price as the game becomes more stable/ more features are added. Price changes will be planned far in advance and will be very transparent.”

“I plan to involve the community strongly in the development process. Players are encouraged to join the game's discord server to help contribute ideas for maps, future game modes, and items. (As well as report any issues and bugs they encounter)

Players can join our discord server to talk to me directly and help contribute ideas for the game!

You can join the discord here: https://discord.gg/pkUXCX3b47”


Heads up: This game is online multiplayer only. As I am just a humble Indie, it is likely that, at the moment, you’ll have to set up games with your friends or on our welcoming Discord server(where you can also contribute to the game’s development!). Join the discord here:https://discord.gg/YpGWCbDfyX

Just Act Natural is an asymmetric online multiplayer party game where one group of players hide among a crowd of NPCs doing various tasks while other players seek them out from above.

Play online with up to eight players! 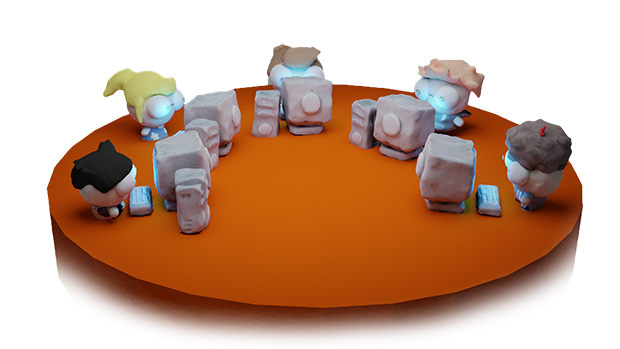 The game features a hand-sculpted clay art style using hundreds of clay models that are scanned and imported virtually.