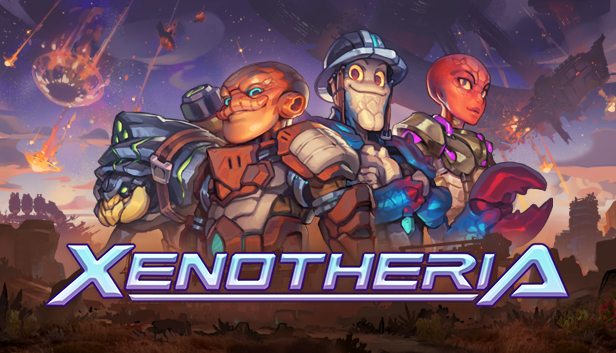 Xenotheria takes place on Wolf Prime, a sprawling desert planet, home to the galaxy’s most important trading post. A seemingly ordinary day quickly turns chaotic after a mysterious, cataclysmic event causes a shower of spaceships, satellites, and orbital stations to rain down havoc on the innocent souls of Wolf Prime.

One of those souls is Mr. Squiggles, a hard-working spaceship construction yard worker who finds himself at the center of the story. What starts as a fight for survival in the remains of the shipyard soon becomes an epic journey across Wolf Prime searching for the truth behind recent events.

Traverse a handcrafted, isometric planet in a dangerous search for equipment, resources, allies, and answers. Explore a variety of locations where you’ll recruit allies, complete puzzles, and uncover the mystery of what happened.

Rescue Allies to Aid You on Your Journey

As you explore the various towns, derelict spaceships, and orbital stations, you’ll meet potential allies that will join your team. Throughout the game, you’ll be swapping team members to maximize your deck’s effectiveness vs. specific encounters and enemies.

Craft Your Deck for Maximum Impact

Each party member has their own set of cards, which together form your main deck. You’ll craft cards and build your deck with resources awarded through combat and by solving various puzzle-like encounters, giving you freedom over your playstyle.