Age of Darkness: Final Stand
Developer
PlaySide
Publisher
Team17
Age of Darkness: Final Stand is a dark fantasy survival RTS where you must illuminate, build and defend humanity’s last bastion against hordes of Nightmares. Set in the remnants of a kingdom consumed by a deadly fog, you decide. Will you hide in the light? Or take back your world.
Recent Reviews:
Very Positive (495) - 88% of the 495 user reviews in the last 30 days are positive.
All Reviews:
Very Positive (2,799) - 89% of the 2,799 user reviews for this game are positive.
Release Date:
Developer:
PlaySide
Publisher:
Team17
Tags
Popular user-defined tags for this product:
Survival RTS Base Building Dark Fantasy Resource Management Building Fantasy Strategy Singleplayer Stylized Atmospheric Medieval 3D Combat Early Access Dark Tactical PvE Colony Sim Action RTS
+
Reviews
All Reviews:
Very Positive (89% of 2,799) All Time
Recent Reviews:
Very Positive (88% of 495) Recent 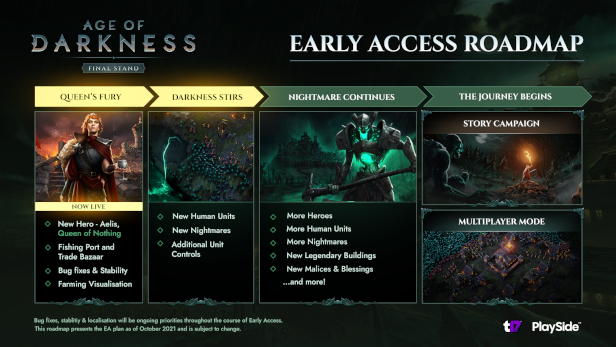