Heart of the Wildfire 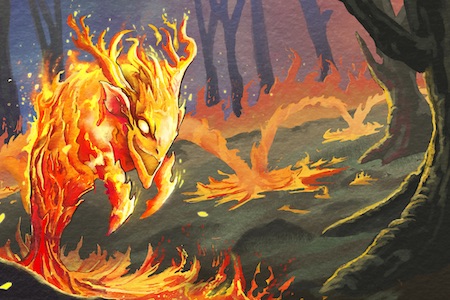 Burning, blazing, rising, consuming - Heart of the Wildfire is quite fond of humans, in a general sense: they keep hearths and use fire as a tool all the time, and those sparks give birth to so many lovely conflagrations! It is the nature of Spirits to be true to what they are, so even though Wildfire knows on some level that too much fire is bad for the land, it just doesn't think about that aspect of things very much. It is also, after all, a spirit of renewal after the blaze, so it implicitly assumes that everything will regrow eventually. (Its strong ties to A Spread of Rampant Green probably contribute to this point of view.)

It fights the Invaders partly due to the exhortations of other Spirits, but more for the sake of the Dahan, as it's become clear that the Invaders have no compunctions about putting them to the sword. (The Dahan and it have a long and storied history together, beginning with the very first Dahan settlements.) It is also, it should be said, somewhat gleeful over the chance to really cut loose without the other Spirits getting all riled up and putting out its firestorms.

Serpent Slumbering Beneath the Island 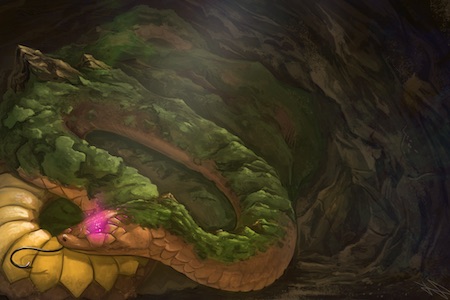 Let's shift our sight so we see only spirits. There are throngs of them visible across the surface of the island: spirits of tree and glade, of rushing river and entangling vines, of beast and butterfly and mists floating eerily over the marshes.

Turning our vision downward, we see nearly as many within the land itself: spirits of hard unyielding stone and of drifted sand dunes, of sinkhole and high peak. Vital Strength of the Earth is here.

As we look deeper, fewer spirits greet our eyes - some of volcano, some of dark and ancient caves, a handful of others. But like the earth itself, most of those we see are large, powerful, and slow.

Deeper and larger than all of those lies the Serpent Slumbering Beneath the Island. It could be argued that it is the Island, or at least its roots. Like all spirits of such size and power, it is slow beyond human reckoning. Unlike many of them, it is also asleep.

Or, now, mostly asleep. The distant sting of the Invaders' blight has begun to rouse portions of its consciousness towards waking, those fragments aware of the land's surface far above. Even that small aspect of the Serpent is slow to act, slow to awaken... but contains the potential for power greater than most spirits could ever muster.

The Serpent Slumbering Beneath the Island is a high-complexity spirit. If Ocean's big limitation is "coastal" and Wildfire's is "blight", Serpent's is "waking up": it's a very slow spirit, limited in its development, but with the prospect of great power if it wakes up fully.

Spirit Island is an officially licensed product of “Spirit Island: A Game by Eric Reuss" from Greater Than Games LLC.