Dungeons & Cocks
Developer
the Bratans
Publisher
the Bratans
The plot of the game is dedicated to the life story of Matthew Delaney, an elderly Bon vivant who was forced to leave his country, after it had been captured. He reaches the shores of the New World, but the unknown land does not welcome old Delaney as warmly as he planned...
All Reviews:
Positive (19) - 94% of the 19 user reviews for this game are positive.
Release Date:
Developer:
the Bratans
Publisher:
the Bratans
Tags
Popular user-defined tags for this product:
Adventure 3D Platformer Difficult Singleplayer Story Rich Atmospheric Colorful Platformer Action Cute Souls-like Stylized Third Person Mystery Dungeon 3D Character Action Game Alternate History Arcade Exploration Puzzle
+
Reviews
All Reviews:
Positive (94% of 19) All Time

Dungeons & Cocks (Dungeons and Roosters, if you mind the official name) is a third-person adventure game that combines the features of good old three-dimensional platformers and ancient adventure games with shooting, puzzles, riddles and stealth mode (low-poly Lara is the closest comparasant).
The plot of the game is dedicated to the life story of Matthew Delaney, an elderly Bon vivant who was forced to leave his country, after it had been captured and ravaged by the geese. Accomanied by his loyal friends: the goose merchant , the young pimp and a Conquistador the Bear, he reaches the shores of the New World, where he was going to sell the goods he had obtained with difficulty in previous wanderings. But the unknown land does not welcome old Delaney as warmly as he planned... 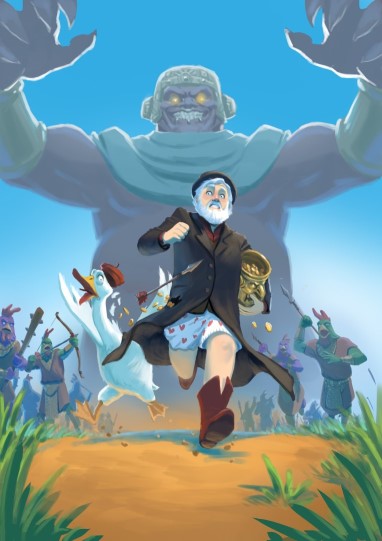