“We are a small team of seasoned developers who create their dream game. Early Access allows us to connect with players, be inspired by them, learn from their feedback and suggestions, so we can make Achilles a game that we can be proud of and you can’t stop playing.”

“We are working on the game for a year and a half now. In about 1 year since the Early Access launch, we would like to release the full version of the game.

“It will feature the full story of Achilles with proper conclusions presented in two very different endings determined by the player's choices. On top of that, you will be able to play multiple challenge modes solo or in co-op that we will be adding regularly during the Early Access period.

“The Early Access version of the game features two story chapters and score challenges that allow you to compete with players from all over the world in randomly generated dungeon runs. In Early Access, the challenge modes are playable with up to 2 players in co-op.

Through the course of the two story chapters (Prologue and Chapter 1), you can find different kinds of weapons, secret rooms, and many interactions within the world.

We estimate that the EA version represents about 20% of the content we have planned for the game with around 30% of features implemented already - including an early version of the GAIA AI system. The final game will feature 5 story chapters, multiple game modes, and major updates and improvements in various aspects of the game including up to 4 player cooperation. We will update the game regularly during the Early Access.”

“We’re selling our game at a lower price during the Early Access phase as it reflects the value of the game that is still in development and rewards players who are willing to support us at this early stage. Naturally, all the future updates are free for those who buy the game in EA.”

“We want to establish a strong relationship with the community to ensure their ideas and feedback are reflected and implemented in the final game. To do that effectively we have created a dedicated Discord server where you can meet and talk with the entire development team. You can join the discussion now: https://discord.gg/eQB62Vs7Z7”

Defy the Gods. Become a legend.

Achilles: Legends Untold is an isometric Souls-like action RPG set in a world inspired by ancient Greek mythology. As the mighty warrior Achilles, you’ll be pitted against great warriors and giant mythological creatures in a centuries-long war between Ares and Hades. Your journey for glory will take you across vast and dangerous lands; from the besieged city of Troy to the golden city of Mycenae, and down to the depths of Tartarus.

Use your shield on the offensive. The greatest warrior in history can use his shield for more than just blocking and parrying. Achilles can also throw it across the battlefield at his enemies with tremendous force, and call it back on demand. Unlock even more shield abilities in the skill tree.

Experience immersive battles against challenging enemies that work together and adapt to your playstyle. Powered by the innovative Group AI Action (GAIA) system, your foes will collaborate in a variety of unique and unpredictable ways during combat. Be on your guard! 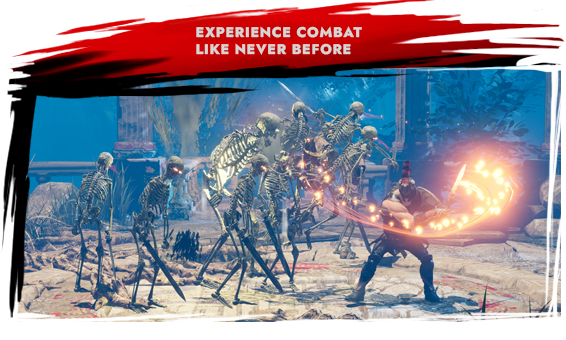 Forge your own playstyle using a deep ability skill tree and weapon crafting system. Bring raw materials you find back to the forge of Hephaestus to upgrade your weapons and equipment, or craft even more powerful ones. The Souls you’ve collected during combat can be used at a Hades Shrine to boost your stats and unlock unique abilities in the skill tree. 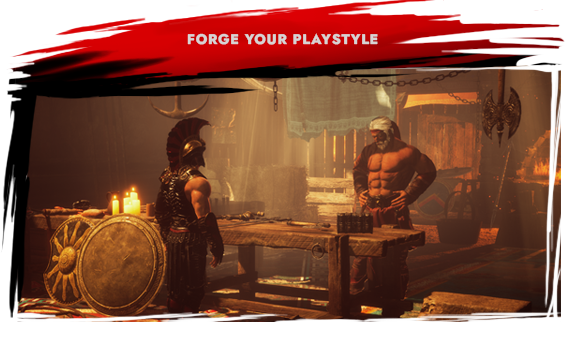 Fight side-by-side and hone your skills with a friend in co-op! Explore procedurally generated dungeons filled with powerful enemies and bosses to fight, and plenty of loot-filled treasure chests to discover. All progress and loot carry over to your single-player experience!

Achilles: Legends Untold is based on Greek mythology, stories of warriors facing their fate in the wars of humans and gods. That's why the game features a violent combat system, there's gushing blood, blood puddles, heads, and limbs that can be decapitated. Sometimes finishers can be triggered, showing the final blow to the enemy zoomed-in and in slow motion.

The enemies are mostly humans but you can also face mythical creatures that resemble animals.

All product names, logos, brands, and registered trademarks are the property of their respective owners.