“We have chosen Early Access as we want to build the game from ground up with you, the players, as this is essential to the quality of the game. The earlier we can include valuable feedback by those who dig the concept of the game, the better the final quality will become. As we are especially aiming with this game to be most enjoyable in multiplayer, the more feedback we can gather also on on technical and network performance the better we will be able to optimize everything up to the full launch.”

“A couple of months - we are eager to get this to full launch asap but without any doubt of quality.”

“The full release will mostly implement the best feedback from our players, have a more final balancing, new crafting recipes, more items, enemies - and as much as we can possibly add.”

“The current version at EA launch will already include the full base gameplay, multiplayer, and enough content to entertain over a long time. But as with most sandbox games, the sky is the limit, we will try to implement as much as we can before releasing the game into EA.”

“Yes, the price will be raised to a higher price point at full launch. The lower price of the EA version is also a bit meant as a treat for you players who embark on this great venture with us at an earlier stage :-)”

“Besides the usual tech feedback and bug reports, which hopefully won't be too many, we are especially hoping and looking for feedback on the sandbox gameplay experience when it comes to balancing and the crafting and building aspects of the game.”
Read more
Check out the entire Headup Games franchise on Steam 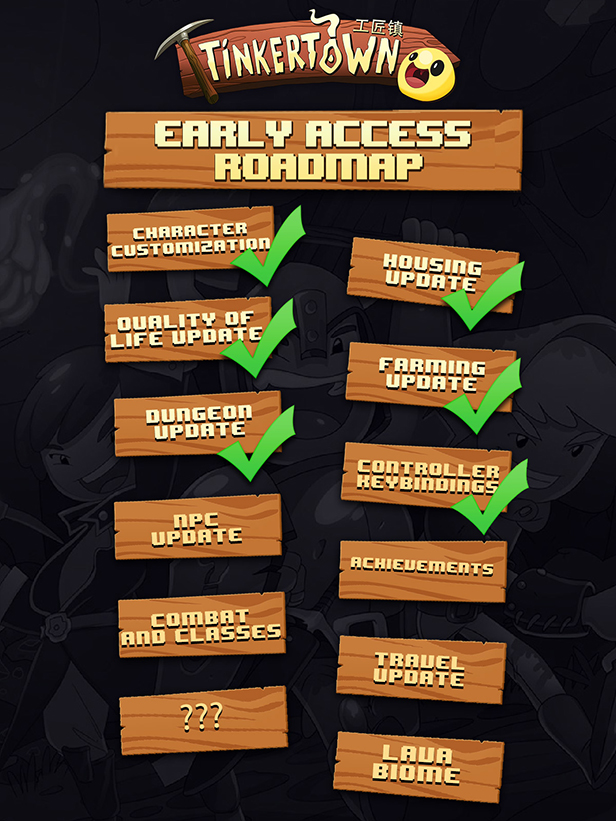 Come to Tinkertown - A refreshing new Multiplayer Sandbox Experience! Grab your shovel, pickaxe, and sword and enter the realms of Tinkertown. A magical place awaits, filled with loot, danger, and creativity. Build your own village - from small shacks to impressive castles and townships.

Collect resources as you explore this procedurally generated world either by yourself or with friends! Be vigilant at all times! Beasts and other creatures roam the surface, defending their territory against anyone who dares to enter it. And only courageous explorers will delve down into the depths of the sinister dungeons, scattered around the world, and challenge the rulers of these lairs. Epic loot awaits those who manage to conquer the underworld!