“Our goal is to evolve this game by listening to the community feedback. The game is already playable and enjoiable in its current form, but we still want to improve it and implement new features according to what the userbase would like to have more.”

“We are a very small but passioned team with lot of ideas. We would like to add more content and actually planned at least 6 months for the full version to release, but we are open to expand it further depending from the community feedback and the success of the game.”

“The game is already playable and enjoiable in its current form, but we are thinking about a lot of possible additions, future developmens will depend greatly on the community feedback we'll receive:
- new guitar models
- new dynamic environments
- new original songs
- new control methods? (joypads, physical guitars...)
- multiplayer?”

“We want to offer a discounted price for the people wanting to support us during early access phase. We will likely increase the price after Early Access also to justify the increasing amount of work and the features added to the game.”

“We will look for feedback/support mainly on discord or steam discussion board.

Rocking Hero is a musical game where you take the part of a virtual guitarrist immersed in beautiful and dynamic environments.

Choose from a selection of guitars and original rock/metal inspired instrumental songs and compete on the global leaderboards with your preferred control scheme.

3 ways to control the guitar:

fingers can interact individually with the keys on the virtual guitar handle, while strumming with the plectrum on the other hand. Both left and right handed
players are supported.

move your hand on the virtual guitar handle interacting with keys, while strumming with the plectrum on the other hand

embrace your pc keyboard like a physical guitar, or plug-in your preferred PC/Console guitar or gamepad controller 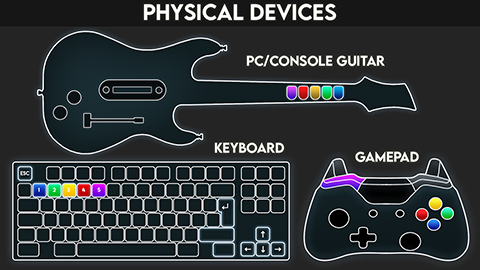 With multiple maps in 2 groups (hand or finger tracked), with different difficulty of execution, note travel speed and number of playable notes (3 to 5).